Motor thefts have increased by over a third (34%) since 2013, according to Co-op Insurance’s claims data*.

The data reveals that people living in Surrey are the most likely fall victim to motor theft, followed by those living in Glasgow, Dorset and Bristol**.

UK areas with the most motor thefts:

The insurer’s claims data also identifies makes of vehicles most likely to be targeted, with Dodge vehicles proving to be the most popular choice for thieves, followed by Land Rovers and Audis***. 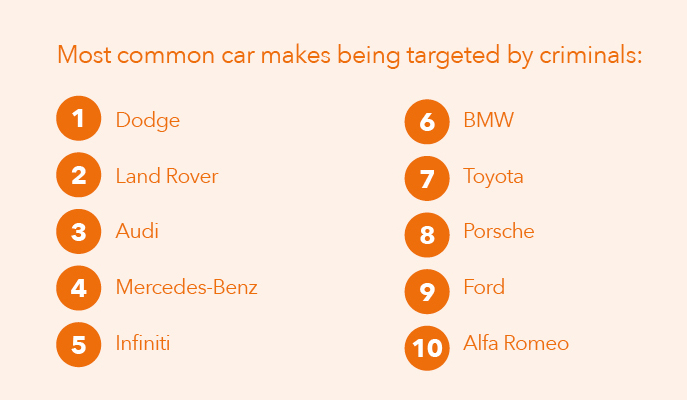 Of those who have had their vehicles stolen, over half (56%) said the motor was parked on a road at the time. For over a quarter (28%), it was parked on a driveway, whilst a seventh (13%) said they were unsure where the vehicle was stolen from****.

Meanwhile, of those who have been a victim of car crime, just 3% said their car was parked in a garage at the time, signalling that such places can be a key deterrent for thieves.

Perhaps contributing to an increasing number of motor thefts, research reveals that a quarter (25%) of UK adults would ignore the sound of a car alarm in their neighbourhood.

“It’s really important that people take measures to protect their own vehicles against theft and look out for others.

“Taking simple precautions such as parking in well-lit areas, avoiding dark streets and not leaving items on display can help to prevent your vehicle being targeted.”

“At Neighbourhood Watch we believe that building strong communities where neighbours look out for each other is key to crime prevention.

“It’s concerning that so many people would choose to ignore a car alarm when this, as well as other actions such as parking under a street light, can reduce the likelihood of being a victim of car crime. It’s times like these that communities need to stick together and look out for one another.”

**** Research conducted on behalf of Co-op Insurance by YouGov among 4,000 UK adults in October 2019

Co-op Insurance is part of Co-op Group, one of the world’s largest consumer co-ops, owned by millions of members. Alongside Co-op Insurance, we have the UK’s fifth biggest food retailer, the UK’s number one funeral services provider, and a developing legal services business.

As well as having clear financial and operational objectives, the Group is a recognised leader for its social goals and community-led programmes.

Sicsic Advisory joins the ABI as an Associate Member ABI