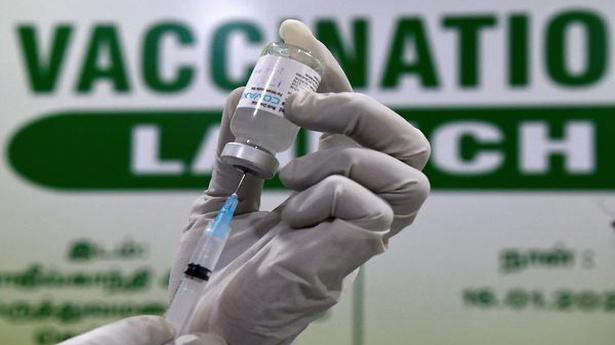 Fighting myths and the virus, the university’s JNMCH team completed phase 3 trials for Covaxin, earning praise from the pharma major

Shafiq-ur Rehman Khan is elated as the Jawaharlal Nehru Medical College and Hospital (JNMCH) of Aligarh Muslim University has received a letter of appreciation from Bharat Biotech for completing the enrolment and evaluation process of 1,000 volunteers under phase 3 trials of Covaxin well within time. Mr. Khan, a microbiology postgraduate, was one of the two field officers in the drive.

“The biggest challenge was to fight the myths that people associate with the vaccine. We were repeatedly asked whether it would cause infertility. It was the reputation of the university and my standing in society that helped us clear the myths,” said Mr. Khan who has been a student representative in the AMU Court.

Also read: Coronavirus | Vaccine dilemma — to take or not to take Covaxin

Prof. Mohammad Shameem, Principal Investigator, said the university got a letter of appreciation from Dr. Raches Ella, son of Chairman of Bharat Biotech, Dr. Krishna Ella, who is coordinating the Phase 3 trials. The letter congratulated the Vice-Chancellor, the professor, and his team for “speedy enrolment and execution.”

“The letter said ‘where other sites failed, your execution will be pivotal for us to mitigate this pandemic.’ We are the first to complete the second dosing as well. The data has been submitted to Bharat Biotech and ICMR. They wanted us to enroll more volunteers if possible but we felt it could compromise the process,” Prof. Shameem said.

The process, he said, started in the first week of November when JNMCH received the letter from ICMR as one of the sites for the COVID vaccine trial.

“The main challenge was fighting some myths that are prevalent in our society not only regarding this vaccine but other vaccines as well like the polio vaccine,” said Prof. Shameem, who was associated with the polio vaccine trial during his internship days.

“Our field workers did a good job in clearing the doubt that the goal of vaccination is not population control. The doubts are not specific to one community or religion. It is again a myth propagated by a section of media and politicians with vested interests,” he said.

The doubts, he added, sometimes also emanate when “we advise the volunteers not to conceive for the next four-five months as we don’t yet know the vaccine’s impact on the newly born. We have to underline it has nothing to do with fertility.”

Mr. Khan reminded the volunteers were not chosen in on the basis of religion. “We covered an area of around 10 kms around Aligarh and we can say the volunteers included both Hindus and Muslims.”

As per ICMR protocol, Prof. Shameem said, 25% of volunteers were from the high-risk category — at least 60 years of age with comorbidities. “Less than 5% were from health care workers. For every visit, they are paid ₹750,” he said.

In the first week following the vaccine jab, Mr. Khan said the team called up the volunteers every day. “After that, we called them once a week. They were given contact numbers to report any adverse effect.”

“We have not received any complaint of severe adverse effect. The only adverse effects that some volunteers reported were pain at the site and low-grade fever. Now when they visit us for the third time on January 23, RT-PCR tests will be conducted ontheir samples,” said Prof. Shameem.

The two volunteers, one each from the Hindu and Muslim majority areas, that The Hindu spoke to, said the doctors cleared their doubts but they were not aware that they could have been injected with a placebo.

Mahesh from Kwarsi area of Aligarh said he saw the trial as a good opportunity to get vaccinated. “We were given a booklet with a consent form. We studied it and I even got my mother, who is a diabetic, injected. We were told that we have to follow the COVID protocol but I didn’t know that we could be injected with something other than the vaccine.” He didn’t know what a placebo was.

Similarly, Tahir from Turkman Gate area of Old Aligarh said he and his wife volunteered after the doctors clearly explained the process. “I work as a guard in the university and felt it would be good if I get vaccinated. How could the doctors inject something other than the vaccine,” he wondered.

Prof. Shameem said it was possible that some of the volunteers didn’t “fully comprehend” the placebo aspect of the trial. “It is clearly mentioned in the consent form that half of the volunteers would not be injected with the vaccine and this was orally explained as well. In the case of the elderly, we also record their audio-visual consent. The term placebo is not mentioned in the form,” he said.

Describing the Bharat Biotech vaccine as a desi (indigenous) tool that is likely to succeed in Indian conditions, Prof. Shameem, who works in the TB and Chest Diseases Department, said, as the vaccine uses the whole dead virus, it was likely to cover mutations.

“Had I not gotten infected with the virus in June, I would have taken the vaccine as well,” he said. However, he cautioned, that the pandemic should not take away the focus off tuberculosis. “While fighting COVID , our goal to eradicate tuberculosis should not get lost,” he warned.

UK thanks Turkey for COVID-19 support