The month of December revealed some stunning news affecting the U.S. working class, as the impact of the viral pandemic and the capitalist economic crisis continues. 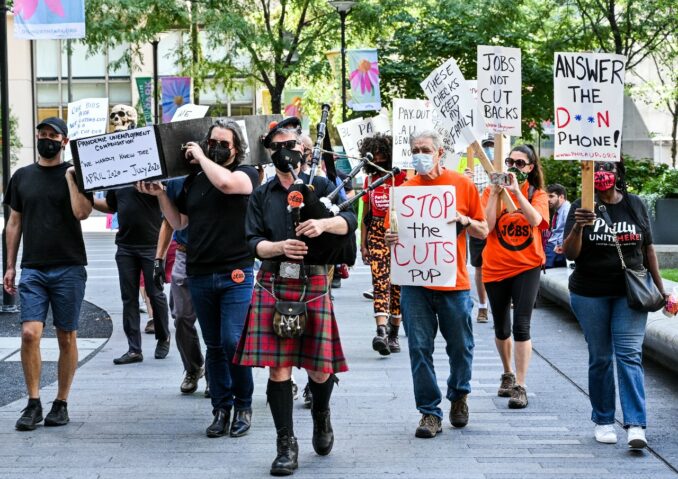 The burden of unemployment has fallen on women, especially Black, Latinx, Arab, Asian, Indigenous, im/migrant and low-wage workers. LGBTQ2S+ individuals and people with disabilities are impacted, too.

In December, a net total of 140,000 jobs were lost due to the declining economy. Notably, it was mainly Black and Latinx women who lost those jobs and more, totaling 156,000 jobs. Some 154,000 Black women left the workforce. Women comprised 56.6% of the laid-off workers, as leisure, retail and hospitality industry bosses cut 498,000 jobs. Women of color — low-paid and lacking benefits — have been disproportionately rendered jobless amid the economic carnage wrought by the pandemic and exacerbated by the capitalist economic crisis.

This is how “essential workers” are treated in a capitalist society!

Women’s work is largely undervalued and underpaid. This can be seen in education, where women make up three-quarters of the workforce, and in food services, where women hold the preponderance of jobs but many earn the minimum wage or less.

In December, the education field lost 62,000 jobs, while 362,000 food service jobs vanished. Business closures and layoffs have occurred primarily in sectors where women are employed, especially Black and Latinx workers.

According to a January National Women’s Law Center report, as of Dec. 31, 2020, the unemployment rate for Black and Latinx women workers was at 8.4% and 9.1% respectively. Long-term joblessness is a stunning 40.8% for Black women, 38.3% for Latinx women and 44% for Asian women! (tinyurl.com/y33pgtwo)

The pandemic and the burgeoning economic crisis have intensified inequities within the workforce based on nationality, gender, class and immigration status. Workers World newspaper reported on Oct. 15: “The viral disaster has exposed gender bias, wage inequality and systemic racism in employment, severely impacting women workers of color. The pandemic has eliminated many women’s jobs in health care, education and transportation.

“Due to ‘occupational segregation,’ many Black and Latinx women toil in the hospitality, food service and retail industry, with low pay and little to no job security or sick pay. Many struggled to make ends meet, even pre-pandemic. These sectors were the hardest hit by COVID-19. Shutdowns, layoffs, even business collapses occurred.”

Women’s participation in the workforce had grown to 50% by January 2020, with 59% of Black women and 58% of Latinx women employed. But the pandemic halted this progress. Some 2.1 million women left the workforce between February and December. And 5.4 million jobs held by women — or two in five of their jobs lost in the spring — have not returned. Women comprise 55% of the net job losses since COVID-19 hit the U.S.

More:  US hopes to start virus vaccines in December

While the rich have gotten richer during the pandemic, the working class has had to struggle, facing a myriad of crises for nearly a year. Millions of workers, disproportionately Black and Latinx, have been rendered jobless. Due to systemic racism, workers of color are being rehired at half the rate of white workers. Evictions loom. Hunger is growing.

The lack of government-provided childcare presents another crisis for those who have low-wage “essential” service jobs and cannot work from home. With many schools and daycare centers closed, many women have quit their jobs or cut their hours to tend to their children. The economic impact on these women could last for years. They are rightfully worried about the future and whether conditions will improve or worsen.

The Economic Policy Institute says 9.8 million jobs have disappeared since February 2020. The think tank stated Jan. 14 that 26.8 million workers are now jobless or have experienced a cut in hours or wages due to the pandemic. (tinyurl.com/y3blh3qj)

More pain is on the horizon for the working class. Some 1.2 million unemployment claims were filed in the first week in January, an increase of 300,000 from the prior week. This signals that companies are terminating employees due to the surging virus. The twin crises of COVID and the capitalist economy are not going away.