It’s been a confusing few months for those who have ordered or shown interest in the UK’s first all-electric estate car.

The brochure for MG’s electric estate originally stated the car has a 50kg roof carrying capacity. Additionally, MG’s website and even early car reviews published in September and October 2020 showed pictures of the car’s roof rails in use.

But the car’s manual states the roof rails are for decorative purposes only. In the manual MG says that using them to carry anything ‘may result in an accident or damage to the vehicle.’

Cue complaints and MG swapping images in its brochure and online to show roof rails with nothing on them.

The entire roof carrying capacity section was also removed from the brochure and does not seem to mention anywhere that the roof rails are purely decorative. It arguably would have been much clearer to state a carrying capacity of 0kg.

Then, to add to the confusion, it was briefly mentioned online in forums on 15 January 2021 (as it appears dealers received information) that the MG estate car may indeed have a limited carrying capacity of 35kg.

More:  Samsung Galaxy Book Ion and Flex: Can they beat Apple and Dell? – Which? News

But MG itself cannot confirm. A spokesperson told us: ‘We are waiting for confirmation from our engineering team, who have been working on this for several months.’

Decorative rails: MG had no plans to recall or remove them

Which? member Les Burrows, 74, placed an order for the MG5 EV at the start of November, and separately paid £900 to have a wallcharger installed at his home so he could charge his new purchase.

But a few days after placing the order, Les downloaded the 267 page manual. He was rather taken aback when, on p62, he came across wording saying the roof rails are for decorative purposes only: 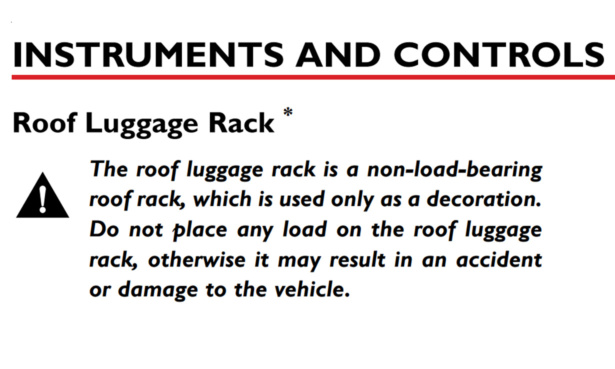 In messages to MG customer services and then in a letter to the Managing Director, Mr Burrows raised safety concerns and refused to take delivery of the car until it had been sorted.

He also called on MG to remove the rails from future cars and recall those that have already been sold.

He pointed out if people did not know about the rails being for decorative use only, and should someone try to use them to carry objects like bicycles and roof boxes, it could lead to a serious accident if the roof rails came loose as they were carrying a load they are not designed to do.

More:  Student credit cards: are they ever a good idea? – Which? News

MG wrote back to him on the 29 December and confirmed ‘We spoken [sic] to our management team and we are sorry to confirm that the roof rails on the MG5 EV will not be removed and the rails will remain as a specification of the model, for decorative use only.’

MG: the current owner must tell the next one

In the same message, MG also confirmed to Mr Burrows that as the specs have changed, it would be his responsibility as the current owner to inform the next owner (should he sell it privately) that the car is not allowed to carry anything on the supplied roof rails.

Natalie Hitchins, head of home products and services at Which?, said:

‘MG must urgently clarify if the roof rails on its cars can be used.

‘If the roof rails are purely decorative and cannot bear any load, we’d expect MG to immediately inform customers, recall this model and remove the rails.’

We have contacted MG again and are awaiting answers to several questions. We will update this story as we learn more.

Are expensive eggs best? – Which? News