At the current rate of transmission, Oregon Health Authority officials project that new infections will increase “substantially” to 570 new reported cases a day and 40 hospitalizations.

In addition, Gov. Kate Brown announced Friday that Lane County has been added to the County Watch List.

HERE´S WHAT YOU NEED TO KNOW ABOUT THE VIRUS OUTBREAK: 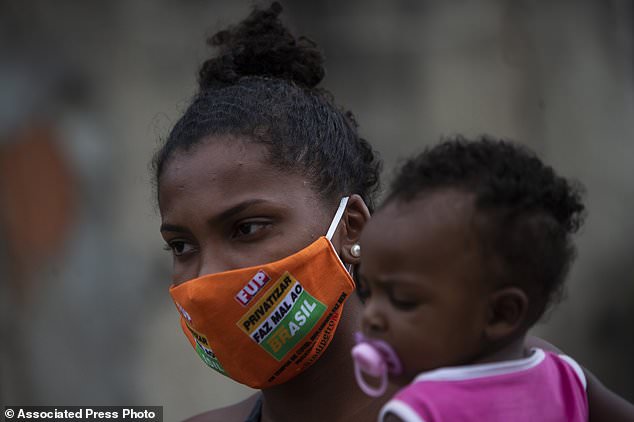 Carolaine Rocha, 22, holds her son while waiting to receive donated food from Petrobras workers and the oil workers union via the Tankers’ Campaign that provide a supplement for the poor caught by declining wages and jobs due to the new coronavirus pandemic, in the Vila Vintem neighborhood of Rio de Janeiro, Brazil, Friday, Oct. 16, 2020. Rocha says that the family’s income comes from the money her husband makes as a barber. “The poor have to work, otherwise we don’t eat. We can’t expect anything from the government,” she said. (AP Photo/Bruna Prado)

– Belgium will tighten coronavirus restrictions from Monday in an effort to hold the disease in check. The new measures include a night-time curfew and the closure of cafes, bars and restaurants for a month.

– Doctors are warning that Europe is at a turning point as the coronavirus surges back across the continent, including among vulnerable people, and governments try to impose restrictions without locking whole economies down.

– Hundreds of Argentine flags dotted the sand of a beach at the Mar del Plata resort, a poignant memorial to the victims of the novel coronavirus in one of this South American country´s virus hot spots.

HERE´S WHAT ELSE IS HAPPENING:

The previous record of 672 on Thursday already had eclipsed records set in recent days.

The state on Friday also reported six additional deaths related to the pandemic, bringing that total to 928.

At the University of New Mexico, eight football players and one assistant coach have tested positive for the coronavirus and high positivity rates in the county where the school is located have forced the postponement of practice.

University athletic director Eddie Nuñez said if the team is unable to practice for the next week, they will not be able to safely play their first scheduled game on Oct. 24 against Colorado State.

SALT LAKE CITY – One of Utah´s largest hospitals had no beds left Friday in its regular intensive-care unit as the governor declared the state´s weekslong spike in coronavirus cases “unsustainable.”

The University of Utah Health had to set up extra ICU beds staffed by doctors and nurses working overtime to care for its critical patients this week as the unit hit 104% capacity, said Chief Medical Officer Dr. Russell Vinik.

“We´ve cut back where we can but it´s precarious,” he said. “We are very concerned about flu season, particularly if people don´t get vaccinated. We can´t take another hit.”

MIAMI – Florida has reported a slight uptick in daily confirmed COVID-19 cases, adding 3,449 to its total caseload on Friday.

The new state report raises the seven-day average of new infections close to 2,800, a figure that had dropped under 2,300 in late September and early October, when the state lifted restrictions on restaurants and the largest school districts began welcoming students.

The COVID-19 hospitalization and deaths figures have been relatively stable in recent weeks.

The number of people being treated in Florida hospitals peaked in late July at more than 9,500, then declined for about two months. But the figure has leveled off for the past three weeks at around 2,000 to 2,200 without further decline.

The state tallied 98 new virus-related deaths on Friday, raising the death toll to 16,030.

RALEIGH, N.C. – North Carolina´s Department of Health and Human Services unveiled a plan Friday in which it described the residents it will prioritize when a coronavirus vaccine gets approved and becomes available.

“We anticipate that populations of focus for initial COVID-19 vaccination will likely be the critical workforce that provides healthcare and maintains essential functions of society, staff and residents in long-term care facilities, and people with two or more co-morbidities that put them at high risk for complications from COVID-19,” the department wrote.

The state will also consider prioritizing specific locations with vulnerable populations or high rates of spread.

The detailed 148-page plan notes that the groups of people getting a vaccine first will be reevaluated over time. “Jurisdictions should anticipate that allocations may shift during the response based on supply, demand, and risk.”

The federal government will be responsible for giving money to North Carolina´s state, tribal and local health departments.

JACKSON, MISS. – Mississippi´s state health officer said he overestimated the number of people who would continue to wear face coverings to prevent the spread of coronavirus after the statewide mask mandate was lifted.

“Why we would broadly abandon something that is so simple – even easy, and effective – just because there is not an executive order, it has perplexed me and I´m frankly quite disappointed,” Dr. Thomas Dobbs said on a video call with reporters on Friday.

After months of declining cases, Mississippi has seen two straight days of new cases topping 1,000, something the state hasn´t seen since around the time Mississippi´s statewide mask mandate was put into place in August.

Gov. Tate Reeves repealed Mississippi´s statewide mask mandate on Sept. 30, citing declining cases. The Republican governor encouraged citizens to continue to wear masks anyway, but added officials “should not use the heavy hand of government more than it is justified.”

Dobbs said Friday the decision was not made lightly. But two months into the mandate, people were lashing out against it.

“There were people who were getting tired of the mandate, and they just sort of were violating it when it was still mandated,” he said. “I think that was some of the concern, that it´s lost its sort of, firepower.”

MADISON, Wis. – Wisconsin broke the record for new positive coronavirus cases on Friday for the third time in a week as a surge that began in early September shows no signs of abating.

The state also hit record highs for daily deaths and hospitalizations this week as a third lawsuit was filed arguing that Democratic Gov. Tony Evers had overstepped his authority by issuing public health emergencies and implementing a statewide mask mandate and capacity limits for bars and restaurants.

Evers on Friday launched a television ad criticizing Republicans for inaction, and the state´s second-largest school district said students wouldn´t be returning for in-person classes until late January at the earliest.

There were 3,861 new coronavirus cases reported in Wisconsin on Friday, breaking the previous record set just a day earlier of 3,747. Wisconsin continued its record-setting pace for hospitalizations, hitting a new high of 1,101 patients on Friday. A field hospital to handle overflow patients opened near Milwaukee on Wednesday.

Evers has repeatedly blamed Republicans who control the Legislature for blocking his efforts to get the virus under control. Republicans are part of a lawsuit seeking to overturn the state´s mask mandate and the Tavern League of Wisconsin is suing to overturn Evers´ order limiting capacity in bars and restaurants.

A third lawsuit filed Friday asks the Wisconsin Supreme Court to rule that Evers overstepped his authority in issuing subsequent public health emergency orders after the first one expired in May.

MEMPHIS, Tenn. – Gov. Bill Lee is calling for the temporary suspension of negative consequences for Tennessee schools and teachers related to student tests for the current school year due to adjustments and disruptions to learning caused by the coronavirus pandemic.

More:  Eric Sprott loads up on Balmoral before Wallbridge tie-up

The Republican governor said Friday that while student testing will continue, he wants to “alleviate any burdens” associated with teacher evaluations and school accountability for the 2020-2021 school year.

Lee said school districts missed critical learning time when in-person classes were suspended during the spring as the virus pandemic struck. While some districts started holding in-person classes when the current school year started several weeks ago, others have maintained online learning only.

Some teachers and school district administrators have called for cancellation of tests or suspension of accountability measures. Teacher pay can be influenced by teacher evaluation scores, and poorly performing schools can be moved under state control.

Lee said he will work with the Tennessee General Assembly on his call to “temporarily pause the accountability that we have in our state that ties student testing to teacher evaluations.” 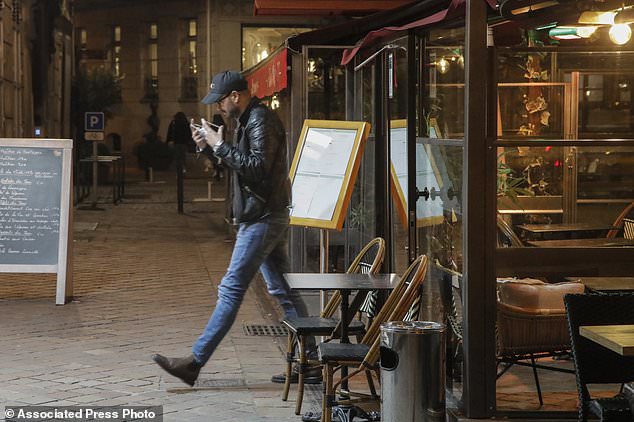 A man leaves a restaurant after closing in Saint Germain-en-Laye, west of Paris, Friday, Oct. 16, 2020. France is deploying 12,000 police officers to enforce a new curfew coming into effect Friday night for the next month to slow the virus spread, and will spend another 1 billion euros to help businesses hit by the new restrictions. (AP Photo/Michel Euler) 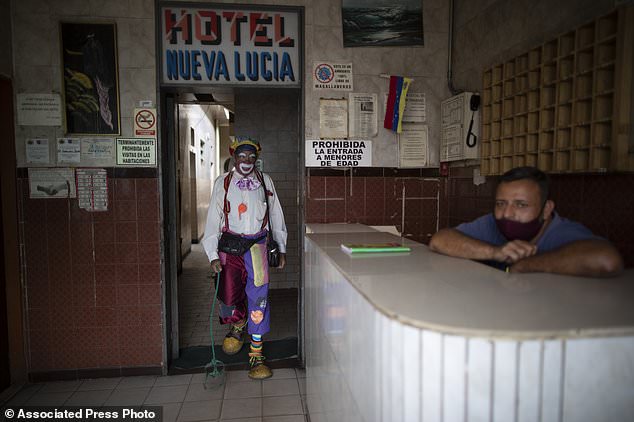 Jorge Felix Moreno, who once made a living working children’s shows and birthday parties has had to reinvent himself due to severe COVID-19 restrictions, walks through the hotel lobby where he is renting a room, in Caracas, Venezuela, Friday, Oct. 16, 2020. Moreno now rides Caracas’ public transportation system all day long performing magic tricks and clowning around for tips. But the 50-year-old clown also gives passengers sound advice on the need to protect oneself against the new coronavirus virus. (AP Photo/Ariana Cubillos) 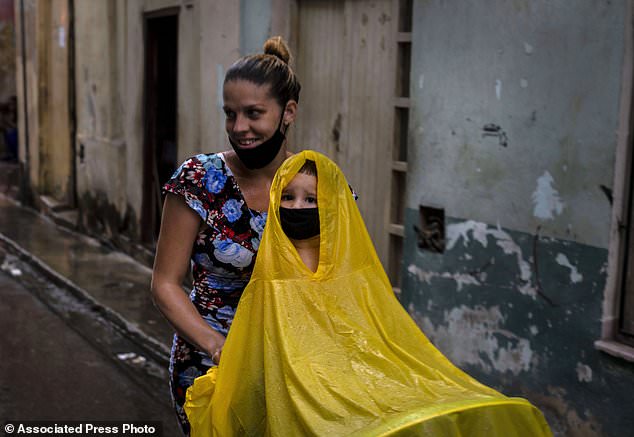 Wearing protective face masks amid the new coronavirus pandemic, a woman pushes a cart with a child wearing a raincoat during a light rain in Havana, Cuba, Friday, Oct. 16, 2020. Cuba relaxed COVID-19 restrictions Monday in hopes of boosting its economy, allowing shops and government offices to reopen and welcoming locals and tourists at airports across the island. (AP Photo/Ramon Espinosa) 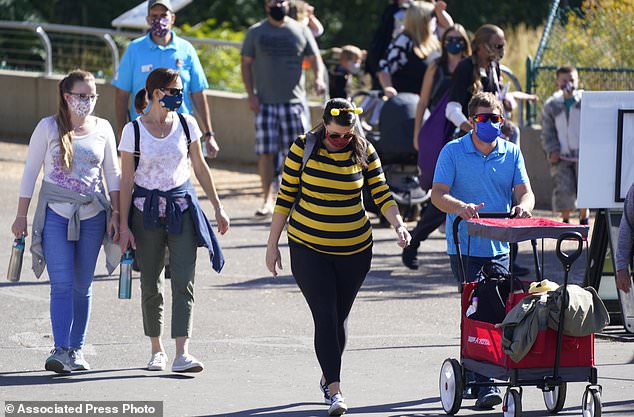 Visitors wear face coverings while touring the Denver Zoo as cases of the new coronavirus spike in the state Friday, Oct. 16, 2020, in Denver. (AP Photo/David Zalubowski) 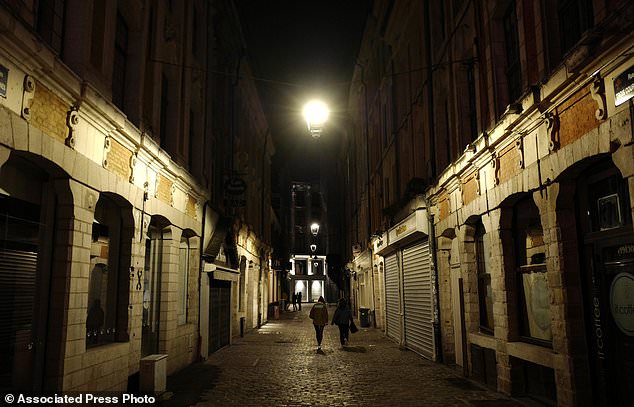 People walk in Lille, northern France, Friday, Oct. 16, 2020. France is deploying 12,000 police officers to enforce a new curfew coming into effect Friday night for the next month to slow the virus spread, and will spend another 1 billion euros to help businesses hit by the new restrictions. (AP Photo/Michel Spingler) 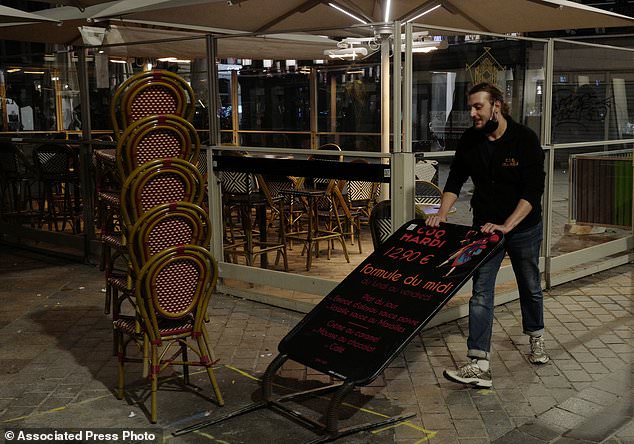 A waiter closes a bar terrace in Lille, northern France, Friday, Oct. 16, 2020. France is deploying 12,000 police officers to enforce a new curfew coming into effect Friday night for the next month to slow the virus spread, and will spend another 1 billion euros to help businesses hit by the new restrictions. (AP Photo/Michel Spingler) 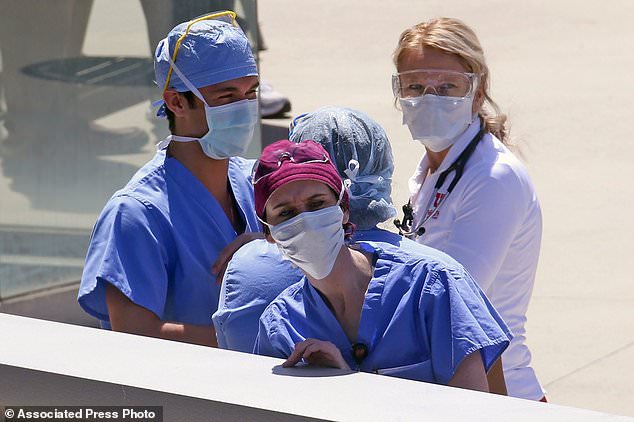 FILE – In this Thursday, April 30, 2020 file photo, Health care workers look on during a flyover at the University of Utah Hospital in Salt Lake City. One of Utah’s largest hospitals had no beds left Friday, Oct. 16, 2020 in its regular intensive-care unit as the governor declared the state’s weeks long spike in coronavirus cases “unsustainable.” The University of Utah Health had to set up extra ICU beds staffed by doctors and nurses working overtime to care for its critical patients this week as the unit hit 104% capacity, said Chief Medical Officer Dr. Russell Vinik. (AP Photo/Rick Bowmer, File) 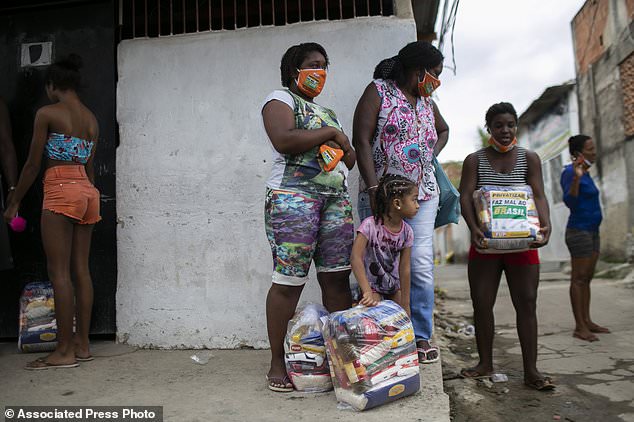 Residents receive donated food from Petrobras workers and the oil workers union via the Tankers’ Campaign that provide a supplement for the poor caught by declining wages and jobs due to the new coronavirus pandemic, in the Vila Vintem neighborhood of Rio de Janeiro, Brazil, Friday, Oct. 16, 2020. (AP Photo/Bruna Prado) 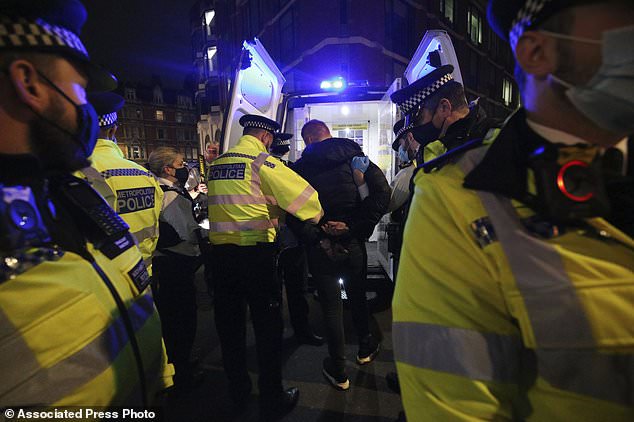 Police detain a man while dispersing a gathering in Soho on the last night before the city is put into Tier 2 restrictions to curb the spread of coronavirus, in London, Friday, Oct. 16, 2020. (Jonathan Brady/PA via AP)