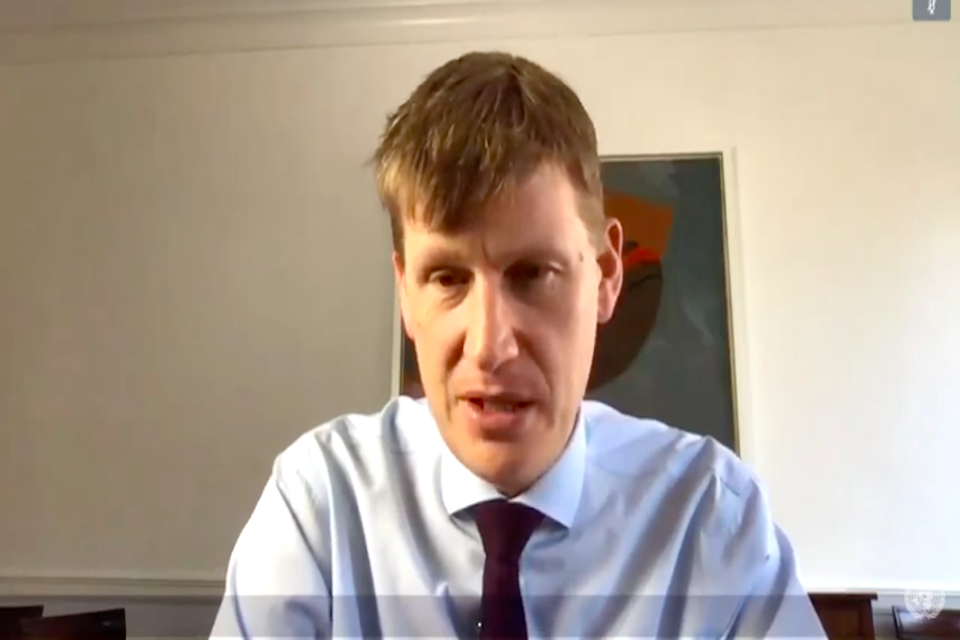 Thank you very much, Mr President. And let me also welcome High Representative Borrell today and thank him for what was a wide-ranging intervention. And I will try to respond to some, if not all, of the issues he raised.

Mr President, the United Kingdom left the European Union on 31 January. We continue to work closely with our European partners, and our outlook will always be global. We recognise the mutual benefits of international cooperation across all areas of the United Nations cross-cutting work to promote international peace and security, sustainable development and human rights.

Mr President, as the world grapples with COVID-19, it is clear that pandemics do not respect borders. Saving lives around the world requires a coordinated international response. To deliver a robust global response we must all continue to support the international system and the values and rules which underpin it. Tackling this pandemic and its grave effects on our shared parity and stability requires enhanced trust in national governments, in international cooperation, and international agreements.

High Representative Burrell and other speakers have raised the situation in Hong Kong. The United Kingdom is deeply troubled by the decision of the National People’s Congress of China to impose national security legislation on the people of Hong Kong. If China follows through on this decision, it would clearly violate Hong Kong’s high degree of autonomy and freedoms as enshrined in the United Kingdom-China Joint Declaration. I would like to draw the attention of all Council members to the joint statement that Foreign Secretary Dominic Raab issued earlier today with his US, Canadian and Australian counterparts, which sets out our concerns in more detail. We hope that China will now pause to reconsider, take steps to rebuild trust and heal divisions across Hong Kong society and live up to its responsibilities and obligations as a leading member of the international community. In the meantime, the United Kingdom will remain in close contact with all our international partners about next steps.

Mr President, to end the COVID-19 pandemic we need to work with all our international partners, including the EU and the UN. International collaboration keeps supply chains functioning, supports finding and distributing a vaccine, and guides the vital health, humanitarian and development operations of United Nations funds, programmes and agencies in the field. Demands on them will only grow as the crisis deepens. Our response must include supporting the most vulnerable countries, and particularly those directly affected by ongoing conflict. In this regard we welcome the African Union’s role in the co-operative relationship between the EU, UN and AU in supporting African leadership in states and regions affected by conflict. As part of our global efforts to tackle the virus, the United Kingdom will make a direct contribution of almost $25 million to the AU’s Africa Anti-COVID-19 Fund to help efforts to slow the spread of the virus on the continent and to save lives.

We must ensure we make a green, clean recovery from COVID-19 in order to meet the challenge of Climate Change and ensure an ambitious, successful and inclusive COP26. As COP President, the United Kingdom looks forward working with the UN and the EU to deliver the ambitious outcome the world so urgently needs. We consider our European partners as close allies in combating climate change and in leading the world in low carbon transition.

Mr President, some colleagues have mentioned sanctions. Let me simply say that sanctions are a targeted foreign policy tool used as part of a comprehensive and proportionate strategy with careful exemptions for humanitarian activity. The United Kingdom strongly supported EU sanctions while a member of the European Union and continues now to implement them nationally for the duration of the transition period.

Turning to some of the other points raised by the High Representative, on the Western Balkans, we join international partners supporting the goal of a stable region, continuing its progress towards Euro-Atlantic integration. We welcome the decision to open EU accession negotiations with Albania in North Macedonia. The political agreements in Bosnia and Herzegovina to work on the EU opinion and efforts to normalise the relationship between Serbia and Kosovo through the EU-facilitated dialogue. NATO remains the cornerstone of Europe’s collective defense, and we were pleased to welcome North Macedonia to the Alliance earlier this year.

Turning to Ukraine, the United Kingdom will continue to work with the European Union and other partners in support of international law and the wider rules-based international system to defend Ukraine’s territorial integrity. Alongside our international partners, we will continue to make clear to Russia that we do not and will not accept its illegal annexation of Crimea and Sebastopol. We also underline our support for efforts through the Normandy Process to facilitate a negotiated end to the conflict in Eastern Ukraine and the work of the Trilateral Contact Group.

You mentioned, High Representative the work of the European Union in Libya. The EU and UK have continued to work closely on Libya, including through engagement with the Berlin process. We look forward to further cooperation with our European partners to urge Libyan parties and their backers to de-escalate, commit to a lasting ceasefire, ensure unconditional access for humanitarian aid and return to the UN-led process. We support efforts to enforce the UN arms embargo leading through Operation IRINI and recall of the tragic loss of life in the Mediterranean continues to be a matter of deep regret.

On Iran, we are working urgently with all parties to use the Dispute Resolution Mechanism to find a way forward on the Joint Comprehensive Plan of Action. We regard the Agreement, which was the product of many years of painstaking diplomacy, as a vital instrument in neutralising the threat of a nuclear-armed Iran. We thank the European Union for their ongoing role as coordinator. I want to acknowledge the points made by the High Representative and my E3 colleagues on the US’s decision to not reduce nuclear waivers and underline the importance of continued engagement on the way forward. While we recognise the agreement’s limitations, we continue to work closely with the remaining parties to the deal to find a diplomatic way forward. We have always been clear over our concerns about Iran’s destabilising behaviour, including in Yemen, and our consulting partners, on the broader implications of expiry of the arms embargo in October 2012.

Finally, Mr President, we know the EU/UN cooperation can be particularly effective in the field of peacekeeping. Collaboration through training, partnerships and complementary security initiatives can multiply efforts to further stability, allowing different actors to play distinct but supporting roles. In the Sahel, for example, we value the work of the EU training mission in its efforts to train the Malian armed forces, to which the United Kingdom continues to provide support. We are proud to be partnering with France in Operation Barkhane and also proud to be deploying a 250-strong military contingent to MINUSMA later this year. This will provide situational awareness and information provision for the benefit of all international actors on the ground.

Mr President, an effective United Nations able to tackle so many global challenges is in all of our interests. The United Kingdom will continue to work constructively with the European Union and all other UN members to achieve this.