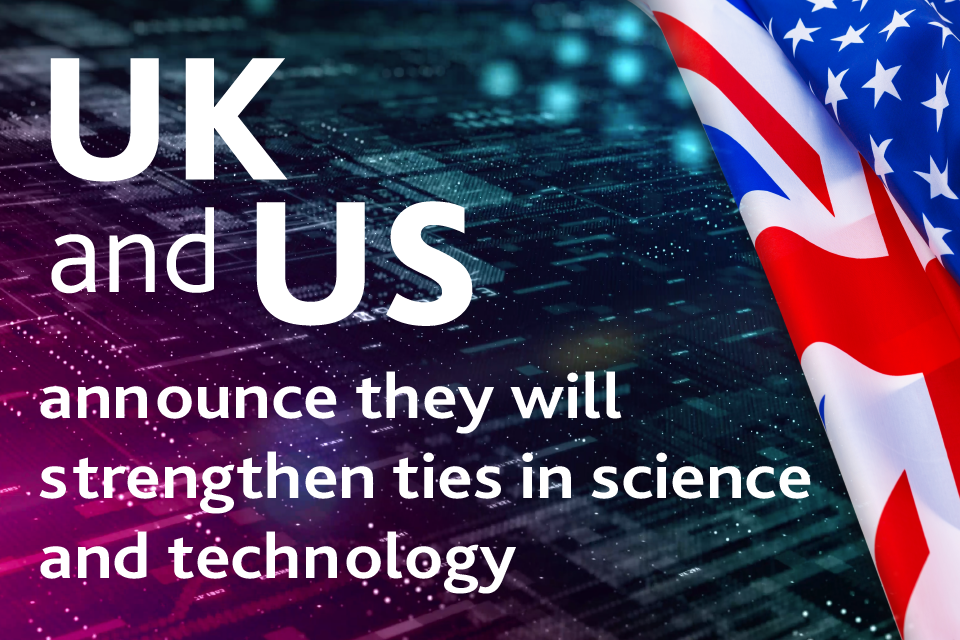 The UK and US have today agreed to deepen ties on science and technology and create a new era of strategic cooperation in the field.

As part of US President Joe Biden’s visit to the UK and under the framework of the revitalised Atlantic Charter, the two countries have agreed to develop a landmark science and technology partnership to strengthen the valued UK-US relationship, creating jobs and protecting the security of our citizens.

Both nations have set out their ambition to continue to lead the world in research and development, investing in our expertise and capacity to create wealth and tackle inequality, and ensure the values of liberal democracies, open societies and open markets are embedded in the design and use of technology globally.

The partnership will explore a number of areas for cooperation including research, innovation and commercialisation; defence, security, law enforcement and intelligence; and making sure technology is used as a force for good around the world. Officials from both countries will work to develop the partnership over the course of the next year.

It aims to strengthen cooperation in areas such as the resilience and security of critical supply chains, battery technologies, and emerging technologies including artificial intelligence (AI) and to improve the accessibility and flow of data to support economic growth, public safety and scientific and technological progress.

It will see the countries work towards a new statement of intent to help realise the full potential of quantum technologies, which use the properties of quantum physics to dramatically improve the functionality and performance of devices, develop proposals on future technology such as 6G and strengthen collaboration on digital technical standards.

The two nations have also committed to continue to broaden collaboration on science and technology to help facilitate world-class research and influence the rules, norms and standards governing technology and the digital economy.

The countries hope to combine their expertise to tackle global challenges such as cancer, pandemic preparedness, antimicrobial resistance, and climate change, including through closer coordination between the Prime Minister’s Council for Science and Technology and the President’s Council of Advisors on Science and Technology, and through closer collaboration between US and UK senior science and technology advisers.

In the 80 years since the Atlantic Charter was signed, technology has changed the world beyond recognition.

But the goals that underpin it still bind the US and UK together today: support for democracy, open societies and free markets.

Today’s announcement marks a new era of cooperation with our closest ally, in which we commit to using technology to create prosperity and guarantee the safety and security of our citizens for years to come.

The United States is our closest ally and most important research partner – a partnership which harnesses the power of the free market, science and new technology to address some of humanity’s greatest challenges, from antimicrobial resistance to preparing for future pandemics.

The landmark new partnership announced today will deepen those all-important ties and ensure Anglo-American research can continue to develop new technologies to generate wealth and prosperity for the good of mankind for generations to come.

Presidential Science Adviser and Director of the Office of Science and Technology Policy, Eric Lander, said:

There are few relationships as consequential as the transatlantic partnership between the United States and United Kingdom in science and technology.

We share a belief in the power of science and technology to improve health, prosperity and security, and a commitment to the importance of investigator-driven research, freedom of inquiry, and equitable participation in the S&T enterprise.

Together, we will seek to set a positive example of how countries can work together to solve the critical and transnational challenges of the 21st century, including pandemic preparedness, climate change, and cancer.

I welcome this closer collaboration which will bring together the best of UK and US scientists and engineers. By combining our expertise to tackle global challenges, such as cancer, climate change, and pandemic preparedness, we can make a real difference and improve people’s lives.

The UK and the US are already global leaders in technologies such as cyber security and AI. Research published by Tech Nation shows the AI sector is worth £32.6 billion and home to more than 1,300 AI companies including firms such as DeepMind. The cyber sector now employs more than 50,000 people in the UK and is worth an estimated £8.9 billion.

Dealroom data shows the UK is Europe’s undisputed tech hub, with £11.3 billion ($16 billion) of venture capital being pumped into the sector in 2020, more than France and Germany combined, and the number of billion dollar tech ‘unicorns’ jumped from 10 to 81 over the same period.

Both governments are backing new technology and innovation. A ten-year National Quantum Technologies Programme, which is set to see over £1bn in private and public investment, has positioned the UK as a global leader in the field and in 2018 the US authorised over $1 billion to advance quantum technologies, with three NSF Quantum Leap Challenge Institutes and five DOE national research centres announced in summer 2020.

The UK government will invest £14.9 billion in R&D this year, bringing investment to its highest level in four decades. This is a major step towards our commitment to increase total public and private R&D investment to 2.4 per cent of GDP by 2027 and includes £200 million for the Net Zero Innovation Portfolio to set the UK on the path to a low carbon future.

This funding includes investment in world leading science and advanced mathematics, and in developing net zero energy technologies. It will also nurture the talent and skills of the next generation – including through the STEM Ambassadors Network and the CREST Awards to ensure that we continue to produce diverse cohorts of world-leading scientists and engineers.

The future partnership being announced today will build on these investments alongside the Digital Secretary’s Ten Tech Priorities which laid out how the government will aim to lead the global conversation on tech, keep the UK safe and secure online, and champion free and fair digital trade.

It will also build on the Prime Minister’s Integrated Review, which outlines how the government will take a more active approach to science and technology – using it to shape and bolster the UK’s policy ambitions and to influence the design and use of new technologies in line with democratic values.

And, later this year, the government will publish its Innovation Strategy which will set out plans to promote and stimulate innovation in all corners of the country.

Earlier this year the Digital Secretary spoke with his US counterparts to emphasize the importance of global collaboration to protect people online and drive the international debate in this area and used the G7 meeting of digital ministers to agree a declaration to put technology at the heart of global efforts to build back better from the pandemic.