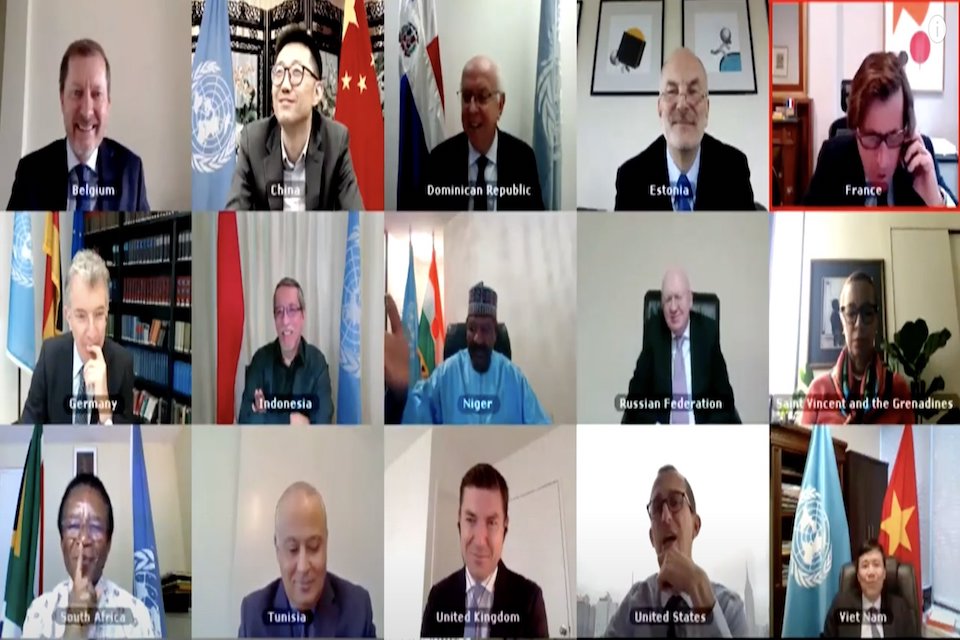 Thank you very much, Mr President, and thank you for your characteristically clear briefing.

Mr President, as we said last time we met, we remain deeply concerned about the devastating potential impact that COVID-19 could have in Syria, a country already devastated by this nearly decade-long conflict. It’s clear that that’s a sentiment also shared across this Council in many of the statements today. And as my Chinese colleague has just said, we will discuss the humanitarian challenge this afternoon. But with 43 confirmed cases and undoubtedly many more, it is vital that all parties heed the Special Envoy’s call for a nationwide ceasefire.

The Secretary-General’s call for a global ceasefire is not just about rightly helping those in conflict zones, but also to allow for our full attention to be devoted to the fight against COVID-19. We can only defeat it if we defeat it everywhere.

We are also appalled to receive news of yesterday’s bomb attack in Afrin that killed at least 40 civilians, many of them children. More families mourning, and our thoughts and prayers go out to those families today. It’s such a senseless act should take place during the holy month of Ramadan; in particular, it is all the more egregious. Preventing a major outbreak of COVID-19 in any part of Syria must be a common task for us all. This virus knows no lines of control or geographical, political or cultural boundaries.

It is therefore vital that all parties adhere to existing ceasefires in Northwest and Northeast Syria and abide by their responsibilities to facilitate humanitarian aid. The current crisis reinforces the need to work together to reach across the divide and to resolve this conflict. The process of seeking a political solution in Syria must not cease. And in this context, it was encouraging to hear at the last session that an agenda for the next round of Constitutional Committee talks had been agreed. It is important that this opportunity is seized before momentum is lost again. And we encourage the Special Envoy to look at ways for talks to go ahead and the meetings to continue.

As we and other Council members have made clear before, the political process under Resolution 2254 extends beyond the Constitutional Committee. In addition, to a nationwide ceasefire, the Syrian regime should also take other important confidence-building measures. These include the wholesale release of arbitrarily detained prisoners and ensuring humanitarian access to all parts of the country. Given the risk of COVID-19 taking hold in prisons, we would also strongly urge the Syrian regime to make widespread release of political prisoners and vulnerable people and to ensure medical care is available for those still in detention. The reported release of 40 detainees in Deir ez-Zour Province is a small step in the right direction.

We also noted that the issue of sanctions was raised by a number of members of the Council in relation to COVID-19. We want to confirm, as I think was well explained by our Estonian colleague, that goods and medical supplies used for humanitarian purposes are not subject to EU sanctions, which the UK continues to apply, and additional exemptions from sanctions are available for humanitarian activity in Syria.

I would also note that the UK and our European partners are among the leading donors to humanitarian aid in Syria, including in regime held areas. In reality, the problems facing the Syrian health sector and economy are a result not of sanctions, but of the Syrian regime, through its cronyism and corruption and through its brutal conduct of the war. If the Syrian regime and its allies wish to see the removal of sanctions, then they know what they have to do: engage seriously with Special Envoy Pedersen and the UN-led political process to achieve a peaceful end to the Syrian conflict.

More:  Launch of Planning for the future consultation to reform the planning system

Finally, we also wanted to say that despite the looming prospect of a virus that could heap further suffering on the Syrian people, we cannot ignore the findings in the recent reports that the Commission of Inquiry, the Secretary-General’s Board of Inquiry and the OPCW and the Investigation and Identification Team.

We welcome the release of the Secretary-General’s summary report from the Board of Inquiry on the 6th of April. Even though the report does not explicitly identify Russia as the regime’s “ally” responsible for some of the attacks on civilian infrastructure, it is clear who they must mean when there is only one country flying military aircraft over Idlib alongside the regime.This conclusion is supported by the findings of the Commission of Inquiry, which identified Russia as responsible for attacks on civilian infrastructure.

These are flagrant breaches of the international rules, which we all agreed cannot be tolerated, and those who have committed crimes must be held to account. That is our responsibility.

We note with deep regret that the very hospitals that were bombed by the regime and by Russia are the same hospitals that could have been used now to fight against COVID-19.

Mr President, the time for action is now. We must ask ourselves how we can now come together to alleviate the suffering of the Syrian people.

ICU nurse on how her life has changed: ‘We’re in … a battle zone’