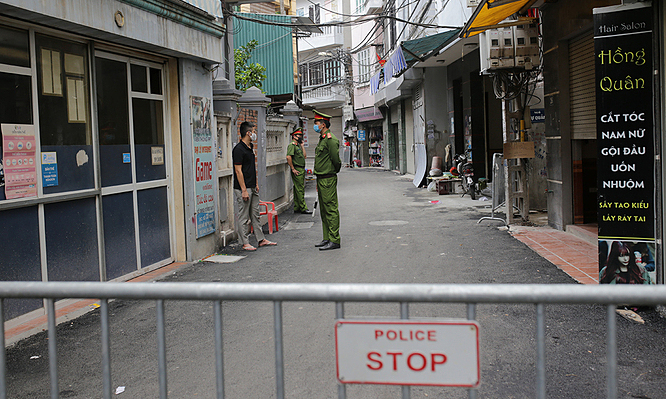 The two patients, one a 23-year-old from Nam Tu Liem District and the other a 76-year-old from Tay Ho District, are thought to have contracted the disease in Da Nang, now Vietnam’s Covid-19 hotspot.

Hanoi Chairman Nguyen Duc Chung has ordered the testing by August 1 of 21,000 people who had recently been in Da Nang. The city will review those returning from Quang Nam Province, which has three cases, but has ordered no testing of them.

He called on people to comply with anti-pandemic measures and wear face masks in public, organizations and businesses to disinfect their workplaces and do temperature checks of employees and malls and other business establishments to limit crowds.

City authorities have instructed pharmacies to inform them about people buying medicines for cold, cough and fever.

Government office chief Mai Tien Dung told VnExpress that though Hanoi and HCMC have recorded cases, the government has not yet considered social distancing measures there.

In HCMC, an American man and a woman who took care of him while he was treated at a hospital in Da Nang before being transferred to the city, have tested positive for Covid-19.

Thua Thien-Hue, home to the popular tourist town Hue and around 100 kilometers south of Da Nang, closed “non-essential” services like karaoke parlors and bars and stopped all crowded festivals and religious gatherings from Thursday.

It also began a 15-day social distancing campaign on the same day that requires people to maintain a distance of at least one meter from each other and prohibits gatherings of more than 20 people in public, except in offices, schools and hospitals.

Similar restrictions have been adopted in Da Nang and neighboring Quang Nam Province.

Vietnam has recorded 43 cases of the disease since it resurfaced in the community last Saturday, 34 of them in Da Nang.