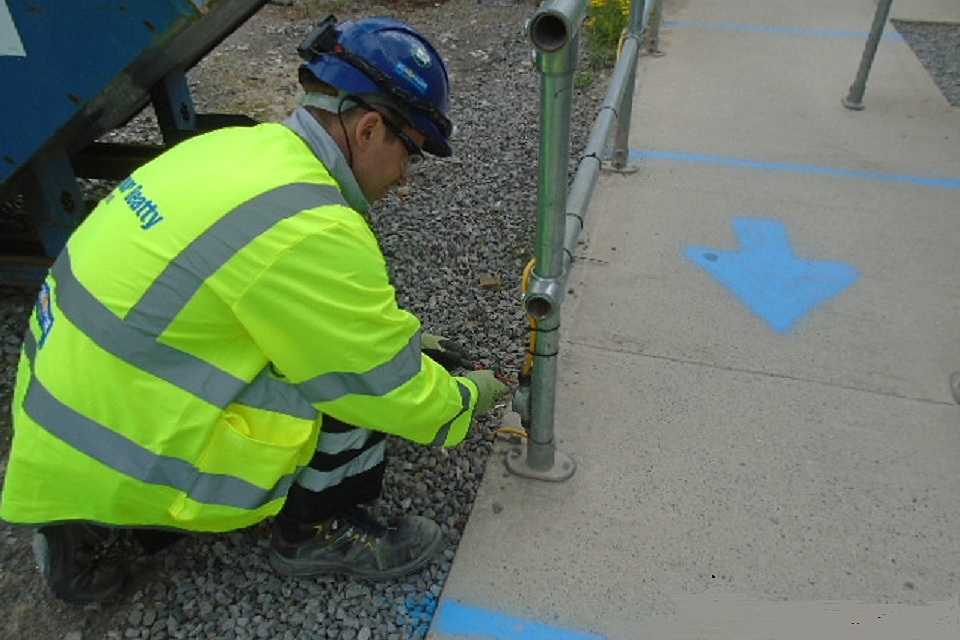 The facility – more commonly known as BEPPS-DIF – is the first of our construction sites to come back online after we paused all but essential projects construction work in March.

Today around 29 people will join the handful of those who started last week on the site. The first group have mainly involved in getting the site ready for a restart of work.

Those who are starting today, and the others who will follow them, will see a very different place to the one they left in March.

We spoke to 2 members of the BEPPS-DIF team who have been working on the site to find out what their views are.

Chris Whitaker is an electrician for Balfour Beatty and has been making sure the emergency lighting is set up and that there’s power in the building.

I was extremely nervous when first got told I was coming in. My wife is pregnant and I don’t want to bring anything home. Getting to see all the physical changes people had put in made me feel a lot better.

It looks a lot different, and because it looks different it makes you feel and act differently.

It’s a well thought-through process. You are directed to a parking bay, which has the same number as your designated table in the canteen.

In the canteen, there’s plenty of space. It can take 150 people, but there will only be about 28 now, and when you sit at a table you have 2.1 metres space around you. I thought that places like the canteen might cause problems for social distancing, but it felt really good and I felt safe.

There are lines sprayed on the floor to help you keep 2.1 metres apart. I’ve been working on my own but I feel confident that today I’ll be okay because I have seen what has been done.

We’ll be working in a 4m2 working area. Some rooms are obviously less than that, I know that, but in a big room having this much space will give us plenty of room to move about and do our job. I’ve not yet seen it in effect, but it sounds like a great idea. Giving that much more space to people while they are working. I know I’ll be able to move about and not feel trapped or stifled.

The key thing I’d say to people returning today is come in with an open mind. What has been done is really good but ultimately the people that are working here are the key to making it work.

I’m not dreading coming in.

Matt Ritson works for SPIRE, which is handling logistics and one of his roles will be to check people coming onto site.

I came back a couple of weeks ago. It’s very different coming in now compared to back in March.

There are one-way systems for walking around the buildings and the site itself, 2.1 metre floor markings, and everyone gets a designated table for meals and a car parking space.

I was nervous about coming back onto site but it’s clear our safety has been taken very seriously. Everyone wants to protect our colleagues and their families.

It’s easy to keep the social distancing using the lines so I can’t see it being a problem when more people are on the site.

My general worries about Covid-19 are still there, but what I would say is that being on the construction site feels safer than shopping in our local supermarket. The processes in place are a lot stricter.

When working I don’t feel separate from my colleagues because we’ve been issued radios to keep in touch. There are hand sanitisers and wipes everywhere.

I also know that if I have any concerns there are people around who are willing to listen and make changes if required.

I think people coming back this week will be surprised – it’s like a military operation, designed to keep us safe.

The facility is the first of our project construction sites to restart after the pause, and as such is acting as a pilot for other projects.

We will be regularly reviewing all measures put in place, including those on BEPPS-DIF and other projects and other areas of site and our offsite offices.

Any measures brought in will depend on what is appropriate, practical and possible in differing spaces, but the overriding driver will be to keep the workforce safe.

You can read more about the changes we have made to the site here.

Scientists Race To Develop Next Generation Of COVID Vaccines