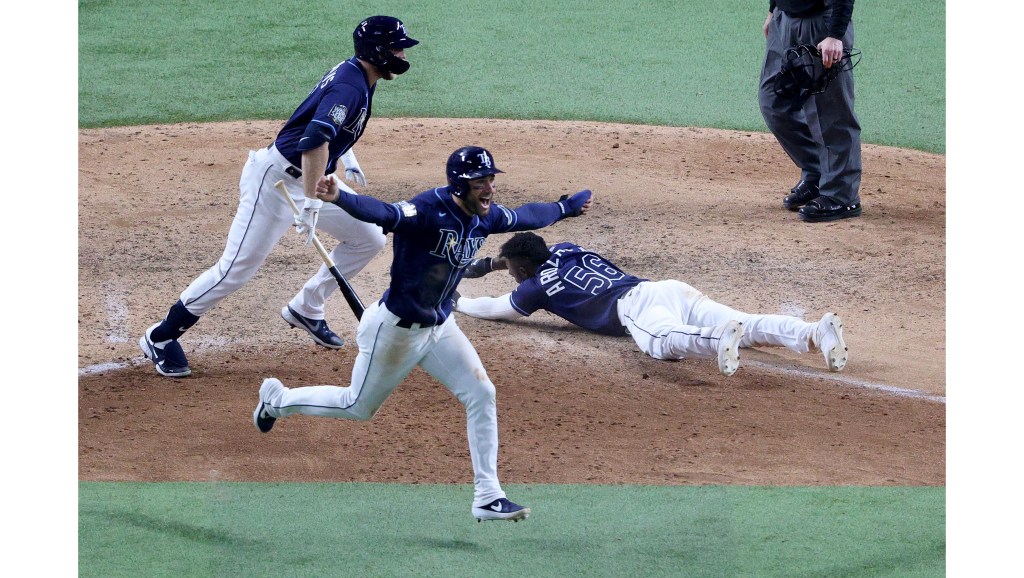 ARLINGTON, Texas — Seven Flags Over Texas is located just down the road from Globe Life Field. It sits mostly empty these days, its rides still with the park all but shut down by the coronavirus pandemic.

It could have been going full bore. The Dodgers and Tampa Bay Rays would still have provided the best thrill ride in town Saturday night.

Every pitching choice Dave Roberts made in Game 4 turned out as wrong as social media always thinks they do. And yet, the Dodgers took a one-run lead into the ninth inning.

The Tampa Bay Rays came from behind multiple times, finally using the Dodgers’ weapon of choice – a two-out hit by Brett Phillips – that drove in the tying run and then the go-ahead run when Chris Taylor mishandled the ball in center field to take Game 4, 8-7, and even the best-of-seven World Series at two games apiece.

It was the first walk-off game in the World Series since the Dodgers’ 18-inning extravaganza in Game 3 of the 2018 Series.

The two teams combined to score 12 runs in the fifth through ninth innings, scoring in eight consecutive half innings (the longest such streak in World Series history) from the bottom of the fourth through the top of the eighth and swapping the lead like a Netflix password.

The Dodgers built an early lead in their customary fashion – with home run thunder and two-out lightning.

Turner’s homer was the 12th of his postseason career, moving him past Duke Snider for the franchise record. He also became the first player to hit first-inning home runs in consecutive World Series games.Seager’s solo shot was his eighth home run this postseason and 11th of his career (matching the Duke).

Both, of course, came with two outs – as did Max Muncy’s RBI single in the fifth inning and Kiké Hernandez’s RBI double in the sixth.

By comparison, the Rays showed up at a dance battle wearing tap shoes. They don’t hit often. But when they do it leaves marks.

Dodgers starter Julio Urias gave up solo home runs to Randy Arozarena (his record ninth of this postseason) and Hunter Renfroe, the Rays staying just a step behind the Dodgers.

Then all hell broke loose.

Leading 4-2 in the sixth, Roberts handed the ball to Pedro Baez to face Brandon Lowe. It was a decision based in some logic – left-handed hitters were 3 for 31 against Baez this season with no extra-base hits.

The next two left-handed hitters he faced hit home runs.

Lowe’s three-run shot in the sixth gave the Rays their first lead of the night. The Dodgers reclaimed the lead with yet another two-out hit – a two-run single by Joc Pederson. But Roberts set social media aflame by leaving Baez in for the bottom of the seventh. He gave up a game-tying home run to left-handed Kevin Kiermaier.

The Dodgers had one more two-out rally in them. Taylor, who had struck out seven times in his previous nine at-bats led off the eighth with a laser to the left field wall for a double. Hernandez popped up an attempted bunt — a bunt! — and Mookie Betts grounded out, putting the Dodgers right where they have been most dangerous.

With two outs, Seager dropped a flare just over shortstop, driving in the go-ahead run with the ugliest of his four hits in the game. It was the 57th run the Dodgers have scored with two outs in an inning during this postseason (adding to their wild-card era record) including all seven in Game 4 and 12 of 13 over the past two games.

Roberts made his only correct choices of the night, getting Adam Kolarek and Brusdar Graterol to put up the first zero in … hours.

In the ninth, though, Kenley Jansen put the tying and go-ahead runs on base with two outs for Brett Phillips. Jansen got ahead 1-and-2 but Phillips dropped a single into center field. Taylor (who moved to center from left after Pederson entered the game) charged the ball, scooped and knocked it away to his left, allowing Arozarena time to round third base and head home.

But Arozarena stumbled and fell and was about to turn back when he saw Muncy’s relay throw home to catcher Will Smith. But Smith spun around looking to tag Arozarena, losing the ball in the process. Arozarena got up, finished his trip and scored the winning run.

Trump renews focus on reopening US after coronavirus hits economy, way of life