The war against the novel coronavirus disease (COVID-19) pandemic has lately got complicated. Three worrisome variants of SARS-CoV-2 are circulating the world: The UK variant, the South Africa variant and the Brazil variant.

India has identified one case of the Brazil variant (B.1.1.28.1), six cases of the South African variant (B.1.351)and 187 people infected by the UK variant (B.1.1.7), Vinod Paul, member (health), NITI Aayog, said at a press conference February 23. The UK variant is 35-75 per cent more transmissible than the original Wuhan virus and results in a 30 per cent higher rate of mortality.

Similarly, the Brazil and South Africa variants seem to have a higher propensity for causing re-infection along with being more transmissible. India has also reported two indigenous variants in Maharashtra. Paul says the Indian variants cannot be blamed for the current surge of cases in the state as of now.

However, the five new variants are a cause for concern as they are the result of mutations in the virus’s spike proteins, which have been used to develop COVID-19 vaccines. Spike proteins work as antigens that elicit the immune response either in the people who get infected or those who receive the vaccine.

“The worry is whether the immunity against the previous variant protects against the mutated variants,” says T Jacob John, a virologist based in Vellore, Tamil Nadu. If the antigen has “drifted” (changed due to small changes or mutations in the genes of the virus), the immunity induced by an infection or by a current vaccine may not match the drifted virus variant, he explains.

There are already some indications of this happening. In the case of the South Africa variant, a preliminary study suggests that the Oxford / AstraZeneca plc vaccine had only 22 per cent efficacy. “These results are very much a reality check,” says Shabir Madhi, a vaccinologist at the University of the Witwatersrand, South Africa, who is part of the study.

Similarly, Novavax’s vaccine went from 89.3 per cent protection in the UK, where this variant is rare, to 49.4 per cent in South Africa. A study published in Nature February 10 suggests that the activity of antibodies developed after vaccination with mRNA (messenger ribonucleic acid)-based vaccines — Moderna or Pfizer Inc vaccine — against the variants was reduced by a small but significant margin. 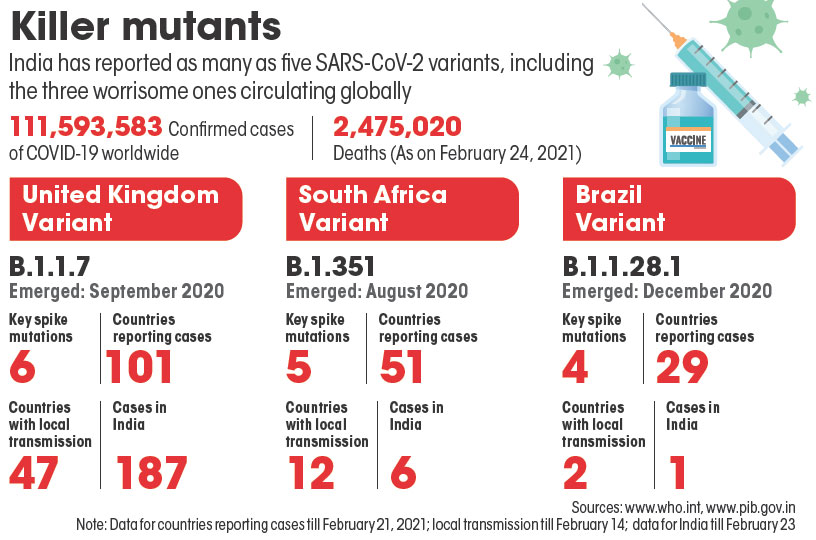 While the new variants and the failure of the vaccine could lead to the resurgence of the disease and extend the pandemic, not everyone is worried. “Increased infectivity may actually shorten the pandemic by speeding up the transfer between individuals,” said Donald Cowan, director, Centre for Microbial Ecology and Genomics, University of Pretoria, South Africa. Pharmaceutical companies will undoubtedly continue to re-engineer their vaccines to account for the new sequence variant viruses as they appear in the community, he says.

It is therefore likely that we will need a “booster” vaccination annually for some years, so as to protect ourselves against the changing virus. There is nothing unusual about this; we have been doing this for flu for decades, he explains. Experts also point out that the variants may or may not affect vaccine efficacy. “Most vaccines have been developed using the original Wuhan virus. However, the vaccines made using the original variant were effective against the new variant that emerged after a couple of months. That tells us mutations are not necessarily a threat to vaccine efficacy. But it has to be proven with evidence,” John added.

The variants have spurred the work on vaccines that work through multiple pathways and not just on the spike proteins. “Such pan-virus vaccines could be made in advance and deployed before the next emerging infection becomes a pandemic,” wrote Dennis Burton and Eric Topol from the Scripps Research Institute, US, in Nature on February 8.

“We call for an investment now in basic research leading to the stockpiling of broadly effective vaccines.” Unfortunately, a similar universal flu vaccine that was conceptualised years ago has not borne fruit. “It is too early to consider if a vaccine that covers all mutants of coronavirus can be developed. We know so much about flu viruses, but too little about the evolutionary biology of SARS-coV-2,” said John.

There is little that we can do to prevent mutations. “SARS-CoV-2 virus variants are likely to keep emerging, just like other viruses, especially the ones that spread as wide and far as this one has,” said Satyajit Rath, an immunologist and visiting professor at the Indian Institute of Science Education and Research, Pune. As we take steps to control the spread, the steps themselves become “selection pressures” for the virus population, and variants that can avoid these steps get an advantage to spread, Rath adds.

More:  Strict COVID norms for Sabarimala annual pilgrimage | All you need to know

“The variants would have been a cause for concern if these were leading to increase in deaths, but this is not the case,” said JP Muliyil, former head, department of community health, Christian Medical College, Vellore, Tamil Nadu. According to his analysis, mortality in people in India aged 16-60 years — the working group — is three per 100,000 people, which is very low compared to numbers in Western countries.

While the world grapples with the possible impact of the variants, in the real world, the caseload and deaths are going down including in those areas where the variants are circulating.

For the time being, experts say it is important that there is strong surveillance for new variants. In India, the government has tasked 10 institutes to work with the National Centre for Disease Control, New Delhi, to form the Indian SARS-CoV-2 Genomic Consortia, which has so far sequenced 3,500 samples. But this alone may not be enough.

“We need to be ready to systematically and quickly test the functional significance of any variants detected, which is poor in the country at present. We also need to seamlessly connect the vaccine development pipelines to this variant identification and testing processes, so that the next-generation vaccine development against such variants of substantive concern can start without downtime, which again is not as systematic as needed, Rath said.

The situation is complicated by the competitive for-profit nature of the COVID-19 vaccine enterprise, he adds. The good news is that all variants — existing or future ones — can, in principle, be controlled with appropriate behaviour, which includes washing hands, wearing masks and avoiding crowded places. “We cannot live in fear. 2020 was the year of the pandemic. We should not make 2021 the year of variants,” says Muliyil.

We are a voice to you; you have been a support to us. Together we build journalism that is independent, credible and fearless. You can further help us by making a donation. This will mean a lot for our ability to bring you news, perspectives and analysis from the ground so that we can make change together.