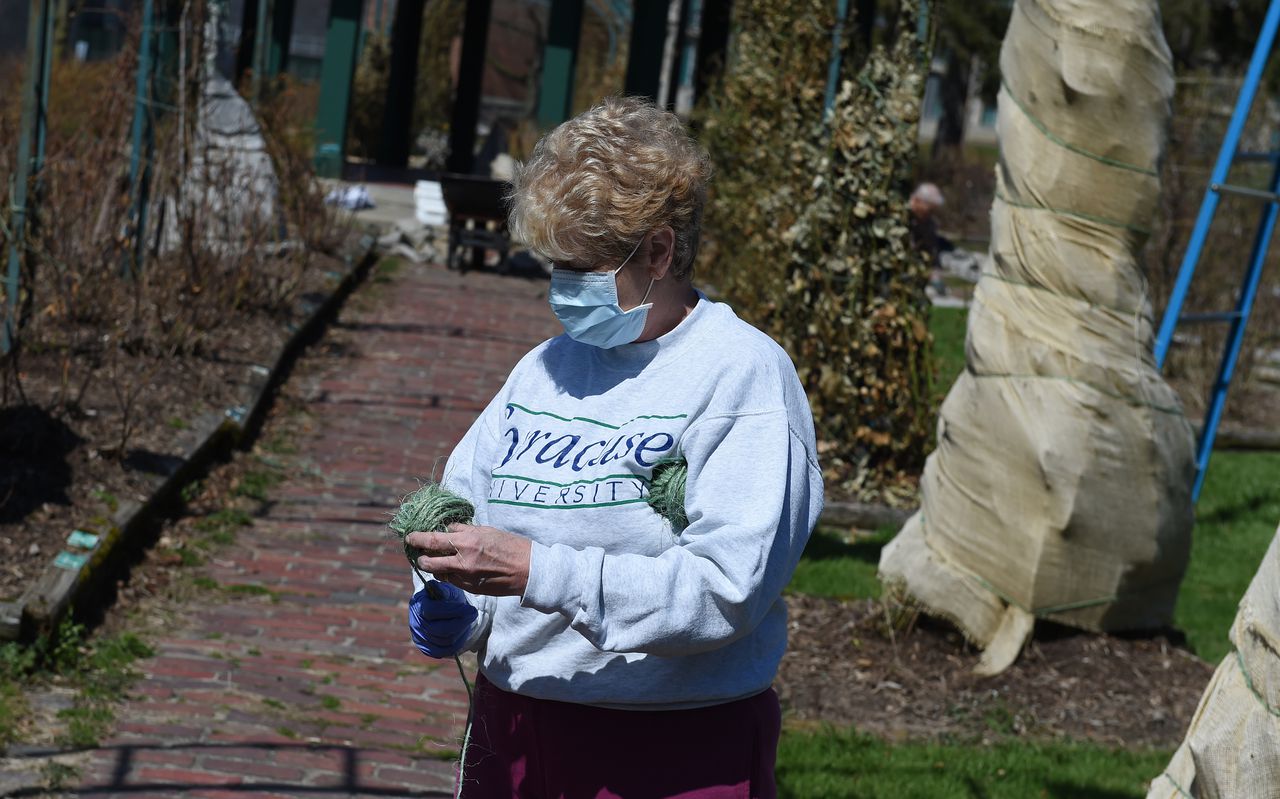 Syracuse, N.Y. — There have been some encouraging trends in the coronavirus statistics issued in the past week in Onondaga County: The number of people testing positive has dropped, and so has the rate of hospitalizations.

It could be, but experts say it’s too early to celebrate. The numbers are small and the trends too recent to reach any conclusions. Nothing illustrates that more than a spike Tuesday in positive cases and hospitalizations after a week of relative stability.

In the past week, fewer people are being tested, which means the drop in positive cases could be simply because we’re not testing as many people.

“Our data is extremely limited, and we’re just getting these little beeps of stuff going on,” said David Larsen, a public health professor at Syracuse University who is studying the numbers locally and globally.

The number of people testing positive and the number entering the hospital tell us two different things.

Positive tests can be misleading, subject to how many tests are conducted and upon whom. It’s likely that hundreds of Central New Yorkers have the virus but never get tested or show up in the statistics.

Hospitalizations, and especially of patients sick enough to end up in critical care, are a better way to track the epidemic because they’re raw numbers rather than rates. They’re also a true indicator of sick people who need help and of the healthcare system’s ability to handle the pandemic.

Six county residents have died of the illness, five of those in the past week.

Over most of the past week, the number of COVID-19 patients in Syracuse hospitals remained fairly constant. It peaked at 31 March 31 and had been in the high 20s through Monday. That’s encouraging, Larsen said.

“If hospitalizations slow down, that would suggest it may be real that we are slowing the spread and flattening the curve,” he said, adding Monday afternoon that it was too early to say that for sure.

It was. The number of people in local hospitals jumped Tuesday, from 29 to 38; that’s both the biggest single-day jump and the highest daily total so far. One day doesn’t make a trend, so we’ll have to see if that was an aberration or the start of an upward trend.

On Monday, Onondaga County Executive Ryan McMahon announced the county had just 13 new confirmed cases of COVID-19, the disease caused by the coronavirus. That was the fewest new cases in 10 days, and represented a big drop from last week, when 20 to 30 new cases were announced each day.

“We are starting to see some data this week that shows a little bit of hope,” McMahon said, attributing the drop to increased social distancing. “If we hunker down for the next two weeks, we’re putting ourselves in a position for success.”

McMahon also touted the fact that the county had just 98 tests conducted Monday, down from as many as 300 on some days last week. A drop in demand for testing is good news, he said.

Not necessarily, experts say. Fewer tests could mean many things, including that tests aren’t widely available, fewer sick people are getting tested, or that the testing is being increasingly targeted to the sick rather than being used to track the virus among the whole population.

“We don’t have a good handle on the scope of the epidemic because we’re not testing enough people,” said Brian Leydet, an epidemiology professor at SUNY College of Environmental Science and Forestry. “And hopefully people are staying home, so you are likely only picking up ‘sicker’ individuals.”

Monday’s 13 positives out of 98 tests mean about 13% of the people tested had the virus. That’s about double the county’s average from the start of the pandemic. That’s further evidence that the focus has been on testing people who are sick rather than screening widely. It may also show that fewer people are getting sick with symptoms that mimic COVID-19’s; they had to be tested, too.

Since the county’s first case March 16, 397 people have tested positive. Twenty of those came Tuesday.

Widespread testing helps get a better handle on how the disease is spreading and identifies people who aren’t showing symptoms but can still pass along the disease. Leydet noted that New York City is aggressively testing: Each day, he said, about 0.15% of people in the Bronx are tested vs. 0.03% in Onondaga County.

Onondaga County has run a total of 5,676 tests, about one for every 100 residents. New York City, the epicenter of the outbreak, has run nearly four tests per 100 residents.

The county’s rate of increase in positive cases has slowed substantially. In late March, the cumulative number of positive cases doubled every three days. It took four days to double again last week, and the county is now on track to double about every 10 days.

Recoveries have climbed slowly, up four cases on Tuesday to a total of 119 cases. The death rate of COVID-19 hovers around 1%, so nearly everyone recovers eventually. A recovery is someone who was sick, either in the hospital or at home, but is now well enough to leave isolation.

When the number of new cases grows faster than recoveries, as it is now, the burden on the health department grows. The county Health Department is overseeing 272 cases, 63 more than a week ago.

One disturbing sign in the numbers is the increase in critically ill patients in Syracuse hospitals. Twelve people were in critical a week ago; on Tuesday, it was 20.

“These are beyond sobering stats,” McMahon said Tuesday at his daily briefing. He once again urged people to stay home and stay away from each other as much as possible. Residents in Onondaga and surrounding counties are still moving around too much and spreading the virus, he said, based on a website that grades communities by tapping cell phone location data.

“We really need as a region to take this seriously,” he said. “How we get back to normal is not with failing grades or average grades, but with exceptional grades in social distancing. If we have excellent grades here, the data will reflect that.”

Coronavirus: The latest news and updates