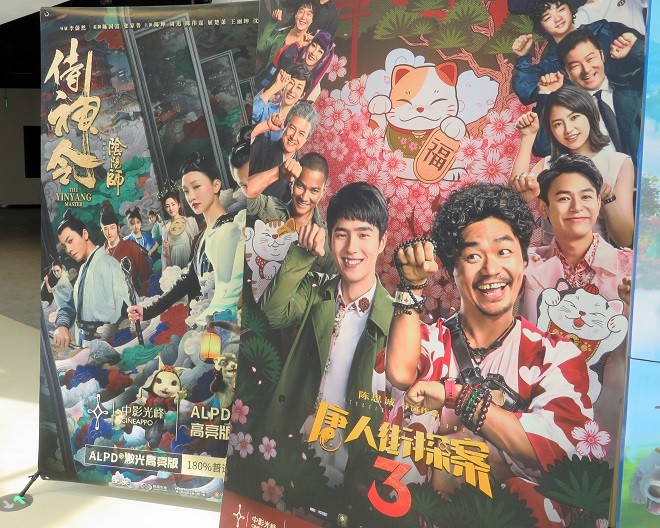 SHANGHAI–The Chinese film “Chinatown Detective 3,” set in Tokyo, co-starring Japanese actors, has shattered box-office records in China amid the COVID-19 pandemic, driven by moviegoers’ thirst to travel outside the country.

The film, which captures the bustling Shinjuku district, night scenes with Tokyo Tower and many other landscapes of Japan’s capital, seems to have struck a chord with Chinese unable to visit foreign countries due to pandemic travel restrictions.

Tokyo had been a popular travel destination for Chinese, who have flooded social media with comments praising the film.

“I was brought to tears seeing the scenes of Tokyo, which I miss a lot,” one person who saw the film posted. “I felt like I’d traveled to Japan,” wrote another.

“Chinatown Detective 3” is the new installment in a popular mystery-comedy series about a detective duo solving difficult cases around the world. It was extensively promoted in China as a Lunar New Year flick for 2020, but the pandemic delayed its release by a year.

When it opened on Feb. 12 to coincide with the week-long Lunar New Year holiday, it raked in 1.05 billion yuan (17.2 billion yen, or $163 million) for its first day, beating by far the opening day box office record in mainland China (730 million yuan) set by Hollywood blockbuster “Avengers: Endgame.”

By the evening of Feb. 15, it had grossed more than 3 billion yuan, the fastest film to top that in the history of Chinese cinema.

The pandemic has greatly contributed to its phenomenal success.

To stop the spread of COVID-19, many Chinese refrained from visiting their hometowns or traveling to other places and stayed in their neighborhoods during the Lunar New Year travel season, leading to more demand at movie theaters.

In addition to “Chinatown Detective 3,” six other movies were also released for the Lunar New Year holiday, each becoming a major box-office hit.

Partially shot in Tokyo in 2019, the film also stars Satoshi Tsumabuki, Tomokazu Miura, Masami Nagasawa and many other Japanese actors.

Scenes of Tokyo shot pre-pandemic appear throughout it, including one with a large procession of cosplayers.

“As soon as the pandemic’s over, I want to go to Tokyo,” posted another person who saw the film on social media, indicating that many who went to see it have a pent-up desire to travel outside China.

“Chinatown Detective 3” is now being considered for release in Japan, according to Story Inc., a Japanese film production company that participated in the project.