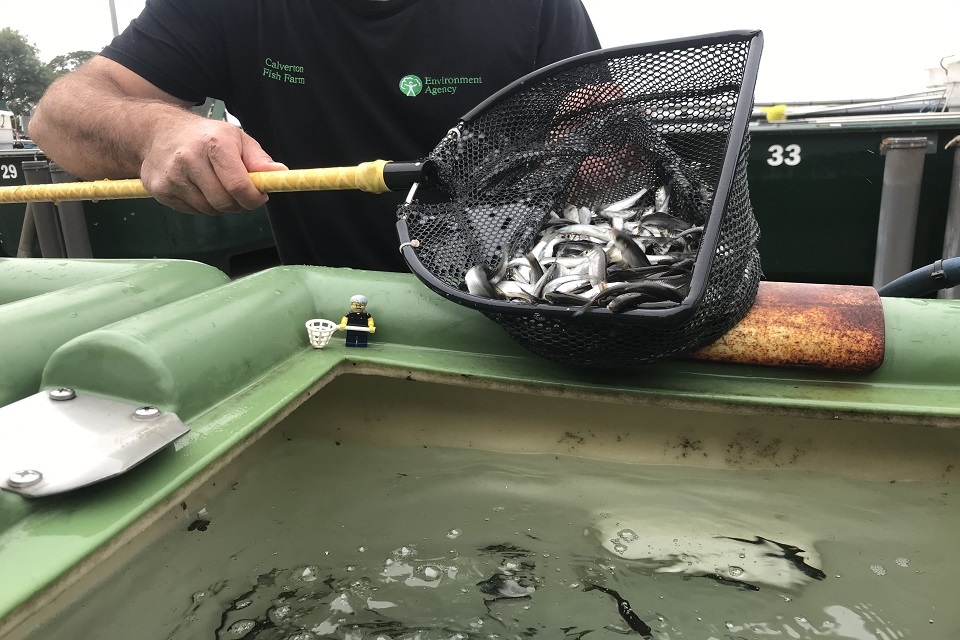 The Environment Agency restocked rivers with more than half a million (520,475) fish last year, as its national fish farm near Calverton produced its largest ever tonnage of fish.

The fish farm also stocked over seven million (7,600,000) ‘advanced reared larvae’ into the wild. The larvae are bred at the farm for longer than tiny larvae, so that they have a better chance of survival.

The farm produces coarse fish including chub, barbel, dace, roach and crucian carp. The fish and larvae replace stocks which have been lost to pollution incidents, following improvements to habitats or where natural reproduction in the area is low. They are also used to help create fisheries in areas where there is a shortage of angling opportunities.

The fish we breed are used for the recovery and re-stocking of rivers and still waters all over the country, so it’s great to see the National Coarse Fish Farm have another record breaking year in the overall weight of healthy fish produced.

The fish farm’s work is a key example of how we inject income from fishing licence fees directly back into fisheries. The fish they produce play an important role in the Environment Agency’s work to restore, improve and develop sustainable fisheries in England.

We’re pleased to have had another record breaking year at the fish farm in 2019. By introducing better growing techniques and achieving a good survival rate for the fish, the overall weight of fish we have produced has risen by 6% to 12.3 tonnes compared with the previous year.

Great care is taken to ensure that every fish we produce is fit for purpose so they can survive when stocked out into the wild. During their 18 months at the farm, we feed the fish live natural food, they encounter a range of flora and fauna, and are trained in flowing conditions while being grown in the earth ponds.

Due to the hot weather over the past few weeks, EA teams have carried out a number of fish rescues across the country. Hot, sunny weather has caused low flows in some rivers and led lakes and ponds to warm up, causing a drop in oxygen levels which can be damaging or fatal to fish. Changes in air pressure found with thunderstorms can make the effects of hot weather more severe.

More:  E3 statement on Iran to the IAEA Board of Governors, November 2020

EA staff have worked around the clock to respond to reports of fish in distress, using aeration equipment or hydrogen peroxide to restore dissolved oxygen levels, clearing pollution, or in some cases relocating fish when it is possible to do so.

The Environment Agency has urged anyone who sees fish in distress to call their incident hotline on 0800 80 70 60.