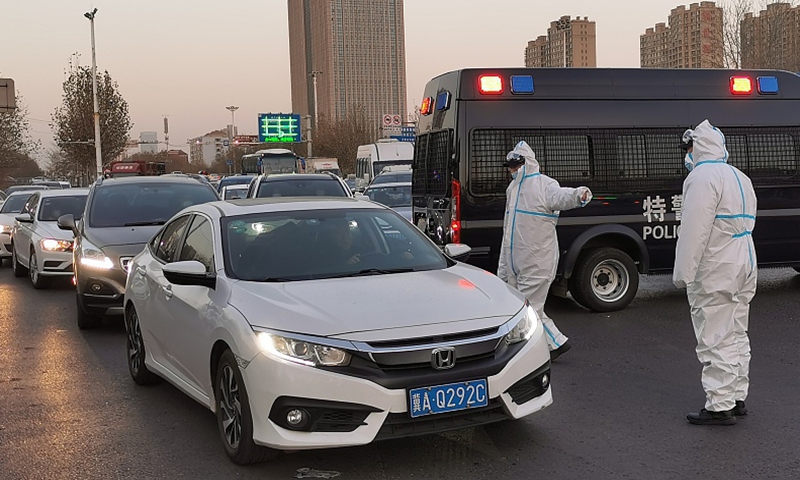 Hebei Province announced to control highways that connect Shijiazhuang in Hebei to the capital Beijing, and to other adjacent provinces amid virus resurgence. File Photo: VCG

As the novel coronavirus sees a resurgence in China, at least 11 regions in three provinces adopted de facto lockdown measures and rolled out massive free nucleic acid tests among populations to curb the spread of the virus.

Adopting measures equivalent to lockdowns and rolling out massive nucleic acid tests in specific areas have become the most efficient and frequently used methods to curb regional virus spreads, the Global Times found.

Local governments did not use the term “lockdown” in their official notices, but are adopting measures similar to lockdowns, which usually mean residents are asked not to go out, vehicles are prohibited on roads and routes into the region are strictly controlled.

Northeast China’s Heilongjiang sealed off at least five regions – Zhaodong, Qinggang, Suihua city’s downtown area, Angangxi district in Qiqihar and Hulan district in Harbin. Local residents are required to stay in their homes and vehicles are prohibited on roads. Exit and entry roads are also closed off.

More:  Retail: Covid-19 stores pop up across the US

Hulan district started testing all its residents from Monday. Zhaodong has completed its first round of nucleic acid tests, while tests in the other regions were ongoing as of press time.

The cities of Gongzhuling and Tonghua in Northeast China’s Jilin are also in de facto lockdowns, while citywide nucleic acid testing is being given to all residents.

Jilin has become one of the provinces in China worst hit by the current outbreaks, with a total of 34 confirmed cases and 80 asymptomatic patients as of press time.

At the same time, four regions in North China’s Hebei Province have also been sealed off – Longyao county, Gu’an county, Nangong and the provincial capital Shijiazhuang.

Longyao, administered by the city of Xingtai, reported two new COVID-19 cases and one asymptomatic case on Sunday.