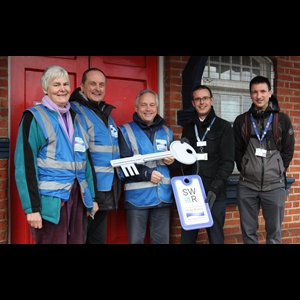 A number of community rail partnerships (CRPs) and station adopters which have been given funding and support by South Western Railway (SWR) have been shortlisted as part of the coveted Community Rail Awards.

The awards celebrate the important, and often unsung work, carried out by community rail volunteers, partnerships, station friends, and community groups, in bringing local people together, running community engagement and rail accessibility initiatives, as well as helping communities get the most from their local railway lines and stations.

SWR provides funding and support to 11 CRPs (an increase from eight in 2019), and now has 55 registered station adopters (an 800 percent increase in less than two years).

In the Involving Diverse Groups category, SWR’s Community Ambassadors receive a nod for journeys they ran with three CRPs (Devon and Cornwall, East Hants and Surrey Hills to South Downs) for young people with learning disabilities, two primary schools and a group from Dementia Friendly Petersfield.

Two out of the three shortlisted community art schemes in the Permanent and Larger Project category come from the network, with recognition for SWR and The Lightbox’s efforts to brighten up Woking footbridge and East Hants CRP’s impressive vinyls at Liss station. In the Smaller and Renewable Project award, Art @ the station, a joint collaboration between SWR and The Art Society, Guildford is recognised.

Works at stations large and small are also highlighted, including the impressive work undertaken by the Surrey Hills to South Downs CRP adding flower displays, a defibrillator, and a recently refurbished volunteer run Information Hub to Haslemere station is shortlisted for the Most Enhanced Station award.

Four projects from three station adopters are picked out in the Small Project (£500 or less) section, including the SWR funded lifeboat planter at Lake station, community activities undertaken by the Friends of Brockenhurst Station, and the Making Connections project completed by the Friends of Wool Station.

The Friends of Brockenhurst Station are also one of two adoption groups shortlisted in the It’s Your Station category, going up against the Friends of Crewkerne Station. Each group has added impressive planters and organised community events at their stations, further helping the locations reflect the communities they serve.

Meanwhile, the man behind the Wool information project, Tony Smale, is recognised in the Outstanding Volunteer section for his individual efforts with the Friends of Wool Station, helping to bring a real sense of community to the location for more than a decade. Tony is joined in the running by a local Purbeck CRP volunteer, Mick Stone, who has been involved with the partnership since its inception, as well as supporting the North Downs Line CRP. One of the driving forces behind the Surrey Hills to South Downs CRP, Ken Griffiths, is also recognised for his efforts both at Haslemere station and along the line.

In the Best Community Engagement category, the Isle of Wight and Lymington to Brockenhurst CRPs are shortlisted for their efforts to adapt SWR’s funding for ‘Music on the Move’, a performance project with live music on trains, to ‘Food on the Move’, a programme which continues to distribute food to those most in need as a result of COVID-19.

More:  First Bus Begins Roll Out Of The Biggest Zero Emission Park And Ride Fleet In The UK

The Isle of Wight CRP’s efforts with Fran Shelley and Alison Botha to deliver the unique Suit Yourself project, offering women the chance to develop their employability skills and confidence is also highlighted in the Influencing Positive Change & Sustainable Development award.

Rounding off the nominations is Three Rivers CRP, with a picture in the photo competition that captured the day the group took the (rather big) key to the redundant space at the station – the first peppercorn lease for a community group of the SWR franchise. The winner of this category will be chosen by a public vote – with anyone able to show their support via the awards page: https://communityrail.org.uk/events-training/community-rail-awards/

“Over the last year we’ve gone further than ever before to help support communities across our network, providing funding to three additional CRPs, helping to create two new job roles, as well as supporting more and more groups to help their station further reflect the community they serve.

“We are extremely pleased to see so many of these collaborations recognised within these shortlistings. All across our network our staff and community partners undertake some excellent projects to support local areas and to have these acknowledged in this way is an extra bonus. We wish everyone luck when the awards are announced.”

The awards will be held as a virtual event on Thursday 9 December.

Travelodge is opening six hotels in the lead up to Christmas