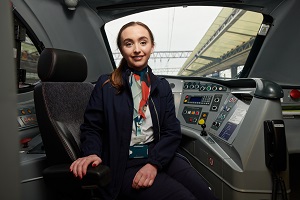 An Avanti West Coast trainee driver is hoping her positive experience in the railway industry will encourage other women to pursue a similar career path.

Historically, being a train driver has been seen as a male dominated profession, but it’s set to change at Avanti West Coast with a third of the new recruits on Chloe’s course being women.

Chloe, from Liverpool, is hoping her involvement in the scheme and events like International Women’s Day will inspire others to challenge long held stereotypes around gender and career choice.

“Even though my dad is a driver, growing up, never once did I think driving was an option for me. Only men drive trains I thought,” explained Chloe. “As a Degree Apprentice, I spent some time working with the Driver Team and I thought why not?

“The company have been incredibly supportive, and that’s given me the confidence to ‘go for it’. And on International Women’s Day that’s the message I’d like to pass onto other women. Don’t’ be afraid to challenge gender stereotypes. If I can do it, why not you? Train driving is a wonderful career, one that carries a lot of responsibility and job satisfaction.”

Paul Makepeace, Head of Drivers at Avanti West Coast said: “We, like many other train operators face a potential skills shortage with a large number of our drivers expected to retire in the coming few years. The industry needs to identify and develop the train drivers of the future, and we’re hoping that Chloe’s story will encourage more women to seriously consider it as a realistic and achievable career to pursue.”

Chloe’s Dad Kevin, who has over 20 years driving experience behind him, was full of praise for his daughter. “We’re so proud of her, not only for getting this far, but also how she’s wanting to use her story to encourage other women who might have previously been put off from applying to be a train driver.”

How Do You Become the #1 Best Company to Work For? Ask Hilton – They Just Did It for the Second Year in a Row

Everything you need to know about holiday travel in 2020