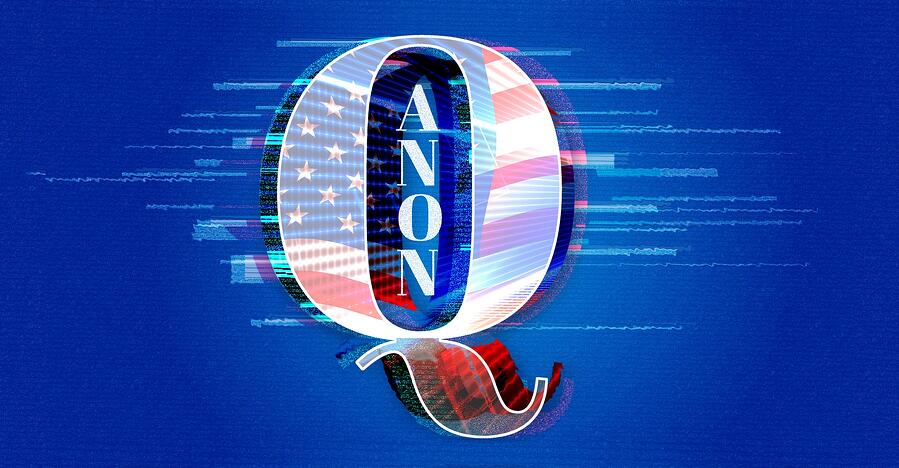 If you’ve paid even a tiny bit of attention to the U.S. presidential election this year, then you’ve heard the name QAnon — or “Q” to his followers. In the past four years, Q went from a character in a silly online game to the creator of the biggest international conspiracy theories, perhaps ever.

Followers of Q interpret his purposefully opaque statements to come up with wild conclusions about what’s “really” going on in Washington: Hilary Clinton is the head of a child-sex ring. There’s a battle between good and evil happening — and Trump is the archangel on the side of good. The “deep state” will end when the “Great Awakening” happens and everyone realizes Q was right all along.

But how did this obscure, anonymous conspiracy theory get so popular that the President of the United States has talked about it? The answer lies in what happens when internet culture is misinterpreted — and spirals out of control.

Q first showed up in the run-up to the 2016 election on the site 4chan, where he (or she — Q has never claimed a gender) first appeared as “Q Clearance Patriot.” The name alluded the user had a high-level government security clearance. And, from go, Q posted cryptic messages about the government, which quickly gained a following on the message boards.

“When I first heard about Q, I just thought that it was a troll, basically, and that it was just somebody having a laugh and kind of tricking people,” Fredrick Brennan, one of the founders of 4chan, said on the Reply All podcast episode about Qanon. “I didn’t take it as seriously as I should have in the beginning. I don’t think a lot of people did.”

According to reporting done by the Reply All team, Q wasn’t taken seriously at first because this type of roleplaying was common on the board. People would “pretend to be some high placed government official leaking secrets” and everyone would play along. But, they explain, something shifted with Q after “10 to 15 posts.” Suddenly, everyone was deep into the game. And maybe it wasn’t a game anymore.

More:  How To Set Up A Server For Small Businesses | Avast

The next move Q made was away from 4chan and on to another message board, called 8chan. That’s where they really started gaining popularity. It’s also when users started taking Q’s message away from the boards and onto more mainstream social media sites, like Twitter, Facebook, and — most importantly — YouTube.

While the participation on message boards is fairly obvious — the sites surface content that users visibly interact with via comments and up or down votes — mainstream social media algorithms tend to be more opaque. That’s a very deliberate move — they want you, the user, to feel like everything is happening “logically” and “naturally” so that you stay on their site longer. They want you to get sucked into their rabbit holes. And the way to do that is to put increasingly shocking content in front of your eyes.

Qanon’s theories, as expounded on by their followers, fit perfectly into this model. YouTube’s format was especially amenable to the rapid spread. (As it is to pretty much all conspiracy theories. Look up “flat earth theory” on YouTube and you’ll see how true that is. Or maybe don’t.) And spread it did, gaining an increasing amount of traction until YouTube finally cracked down on Q supporters in early October 2020, citing a new policy that disallows “content that targets an individual or group with conspiracy theories that have been used to justify real-world violence.” Facebook made a similar move around the same time.

But the conspiracy theory horse has already bolted. And the social media giants are acting like shutting the doors four years later is going to keep it inside, while that horse frolics through the field of American Democracy, trampling everything in its path.

Mainstream social media sites really are to blame for bringing Q to the public, no matter what they want to spout about not wanting to “censor” users. Because while Q was born on the much more obscure, nerdy, weird (and often — but not always — toxic) message boards that attract a very specific kind of visitor, they grew up on the sites that are populated by everyone.

The spread of Q from the deep corners of the net to every corner of America is a prime example of what happens when people don’t understand internet culture. While virtually everyone is to some degree a digital citizen at this point, there are different cultures within that citizenship. Q was born into a very specific culture in a very specific place. Taken out of that context, they grew into something else entirely.

Think of it like the mythical pet baby alligators that grew to monstrous sizes when they were released into the New York City sewer system. Out of context — and out of place — something small and harmless can become extremely dangerous.

There are many morals to be learned from the ongoing story of Q’s popularity:

So do a little work to get out of your personal bubble; even if it’s just occasionally listening to Reply All, which explores the cultures of the internet. Hone your critical thinking skills. Apply Occam’s Razor. Do those things, and it’s very unlikely you’ll get sucked into a conspiracy theory that started out as a Live Action Role Play for a bunch of nerds on 4chan.