Irons are beginning to follow in the footsteps of other home appliances and ditch the restrictive power cords. Even cheaper brands are getting in on the act – our latest tests include a cordless Asda steam iron for just £15.

Cordless irons give you the freedom to set up your ironing board wherever you please without getting yourself or your clothes in a tangle, or getting frustrated by short cords that won’t stretch to the furthest reaches of your ironing board.

It’s easy to see the appeal – but there may be a price to pay for convenience. Cordless irons still require a power source while in use. All of the models we’ve tested use non-replaceable, rechargeable lithium-ion batteries, which could limit the lifespan of your iron.

To find out how they performed in our lab tests, take a look at our full cordless steam iron reviews.

Do cordless irons perform as well as corded models? 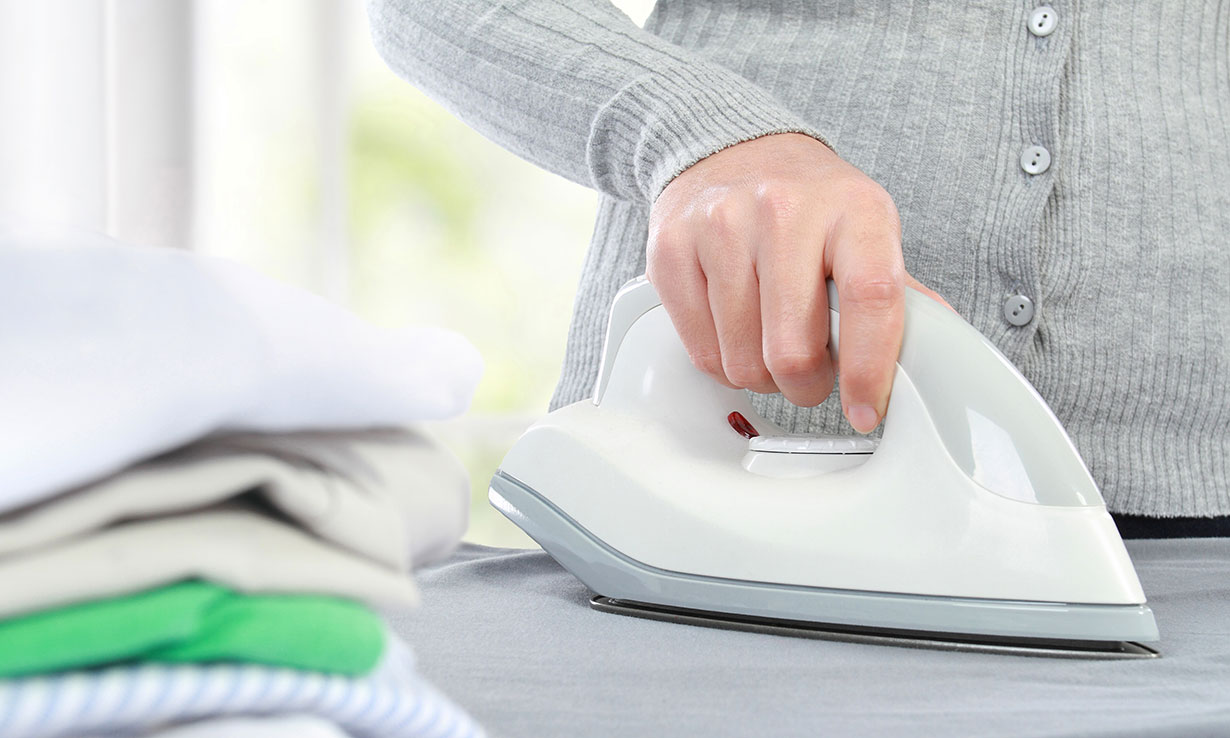 In terms of overall performance – including how well they eliminate creases, and how resistant they are to damage – there isn’t a huge difference between cordless and corded steam irons.

On average, cordless irons achieved a total test score of 57% in our tests, while corded irons scored 63%. It should be noted, however, that while we have tested 137 steam irons, only eight of these are cordless. 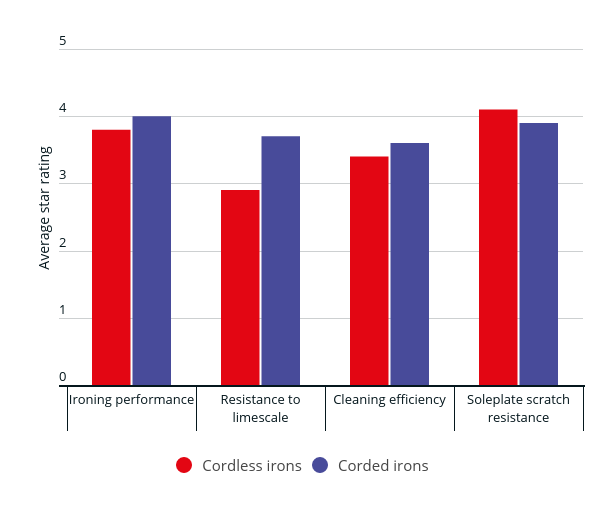 As you can see from the chart above, the only significant difference we’ve seen between cordless and corded irons in our tests is how resistant they are to limescale. On average, corded models achieve 3.7 out of 5 stars, whereas cordless irons get just 2.9 stars.

Limescale build-up causes an iron to lose steaminess over time. Our results suggest this may be more of an issue with cordless irons, especially if you use them regularly, though again we’re only basing these results on a relatively small pool of cordless irons.

It might take you longer to get through your ironing pile if you opt for a cordless model. Some irons we’ve tested cool down quickly once disconnected from their charging bases (see ‘How cordless irons work’, below), so you need to keep popping them back on the base to heat up every minute or so.

This usually only takes a few seconds but will certainly add up over time. You may want to think twice about ditching the cord if you’re desperate to spend less time behind your ironing board.

There’s not too much difference between how long cordless models can iron for before running out of charge, but be aware that this will depend on the type of fabric you’re ironing and the heat setting you select.

Take a look at our Best Buy iron reviews to see which models performed best in our independent tests. 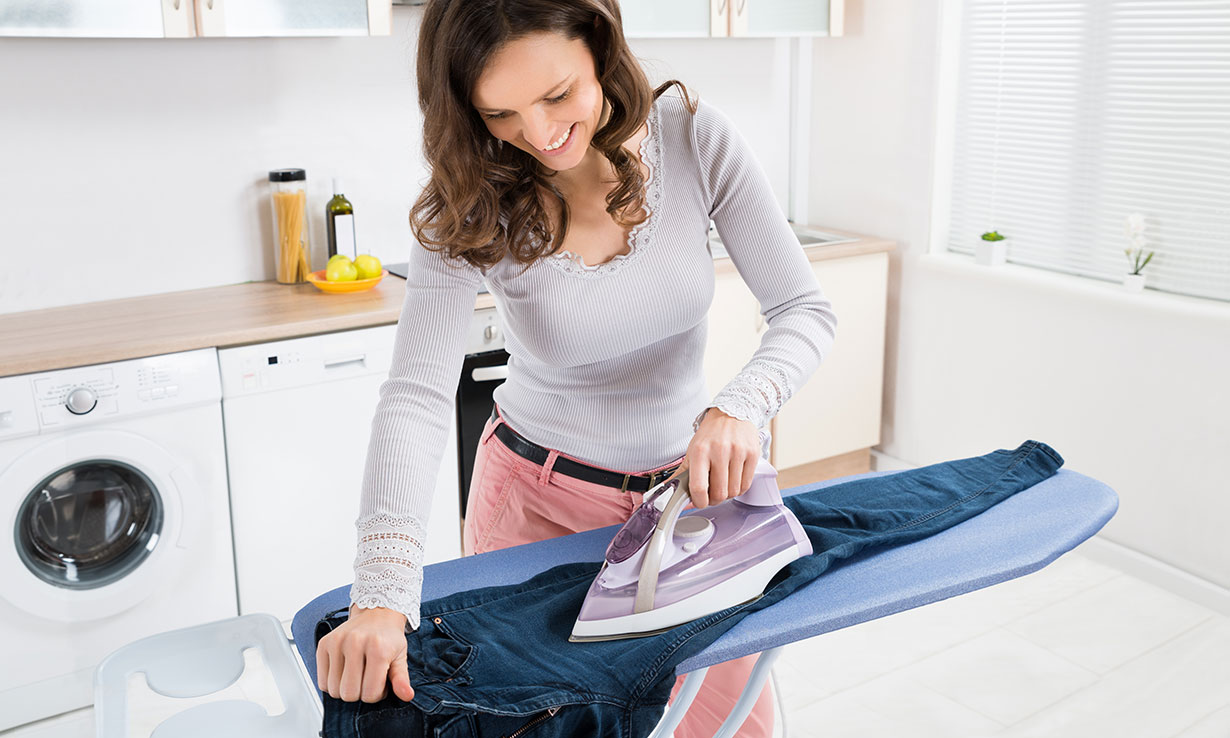 Most popular ironing brands such as Tefal, Phillips, Morphy Richards and Russell Hobbs have now produced at least one cordless model.

We’ve even started to see supermarkets and cheaper brands, including Asda and JML, jumping on the bandwagon as they attempt to make the most of this increasingly popular trend.

As with corded irons, cordless models vary in price depending on the features they offer.

We’ve highlighted three models to consider, depending on your budget. 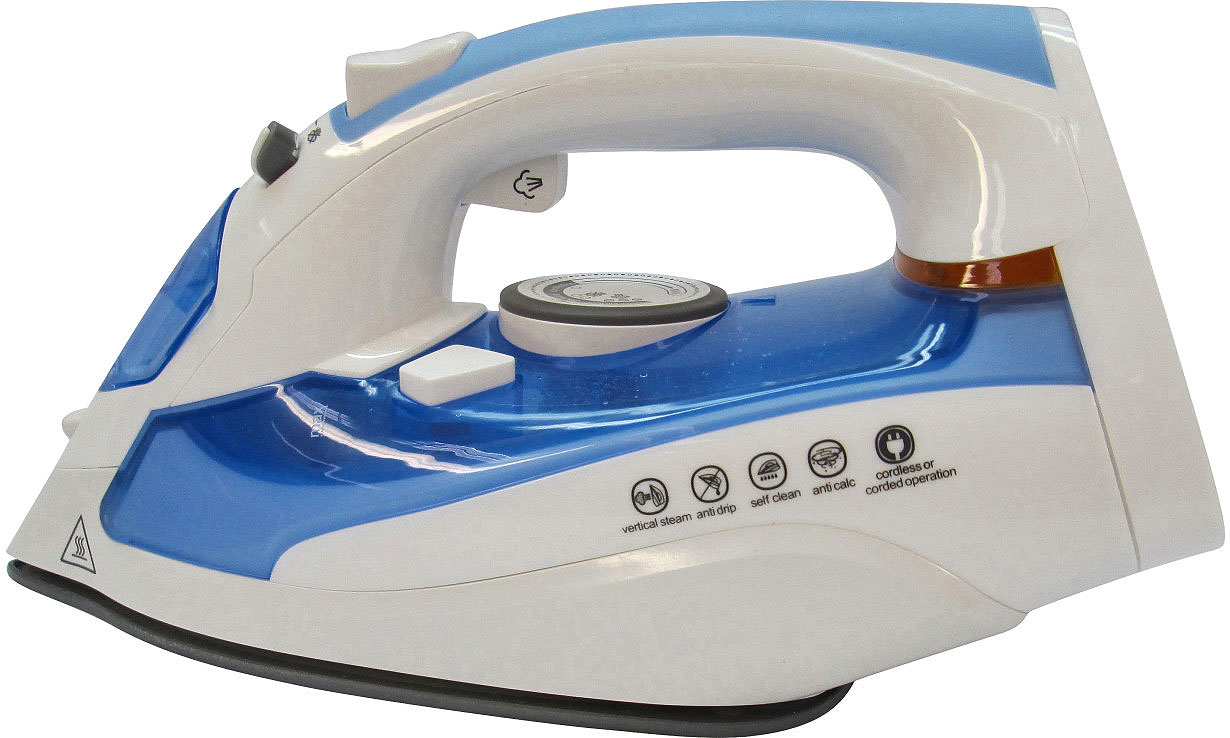 You can use it as a normal iron or a vertical steamer, which is handy if you need to freshen up curtains or other hanging fabrics.

Does this iron’s bargain price mean it will struggle to get your clothes crease-free?

To see how it performed in our lab tests, take a look at our full Asda GCI301W cordless iron review.

An updated version of a previous cordless model, this JML iron has a large soleplate with a precision tip so you can tackle hard-to-reach areas.

If you don’t fancy waiting six seconds for it to reheat between garments you can also use it as a corded model, a handy feature that we haven’t seen on any other cordless irons we’ve tested.

It also comes with an easy-to-use self-clean function, which is designed to keep it producing high levels of steam no matter how often you use it.

Did it live up to the cordless hype in our tests?

Read the full review of the JML Phoenix Free Flight cordless iron to find out. 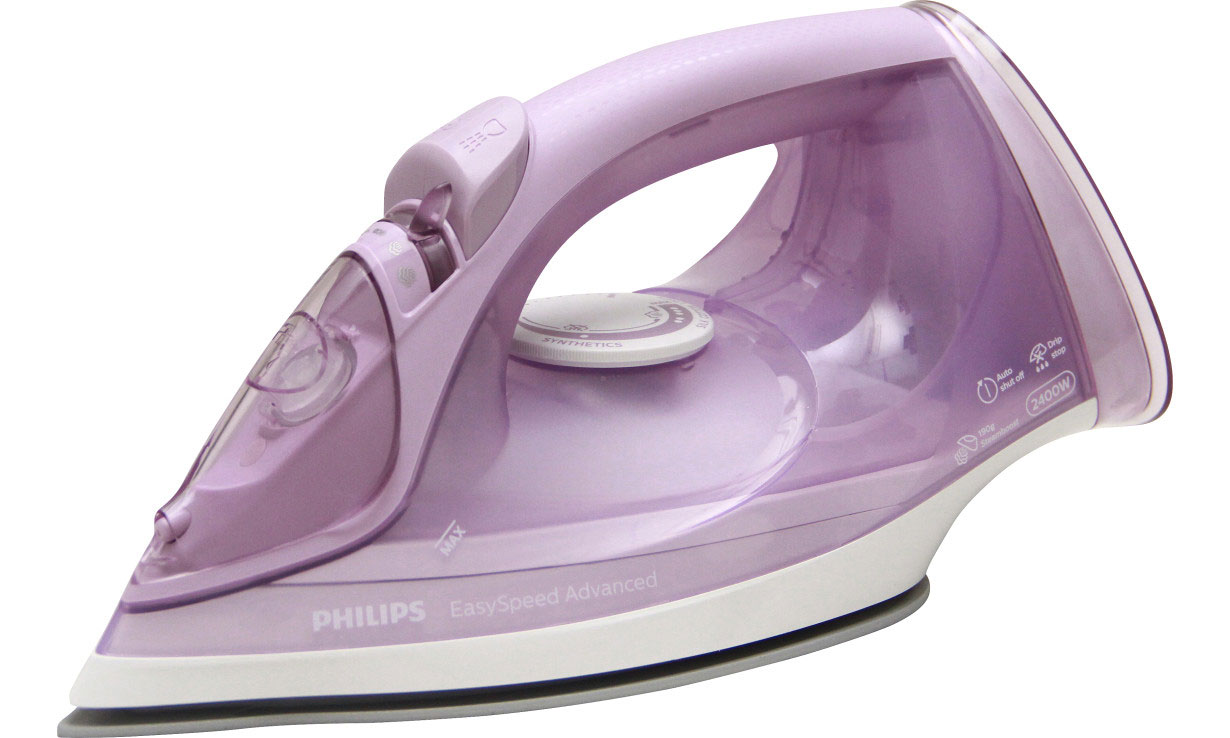 This Phillips iron is the most expensive cordless model we’ve tested so far. It comes with an anti-drip soleplate and an automatic shut off that kicks in if the iron’s left on the base for too long.

As with other cordless irons, you’ll need to pop the iron back on the baseplate to reheat from time to time, but this only takes a few seconds.

The built-in anti-calc system means you can use tap water without worrying about lots of limescale build-up, but how did it fare in our performance tests?

Is this iron’s high price tag justified by exceptional performance?

Read our full Phillips EasySpeed GC3675/36 cordless iron review to see what it’s really like to use.

How do cordless irons work?

Cordless irons can work in a couple of different ways. 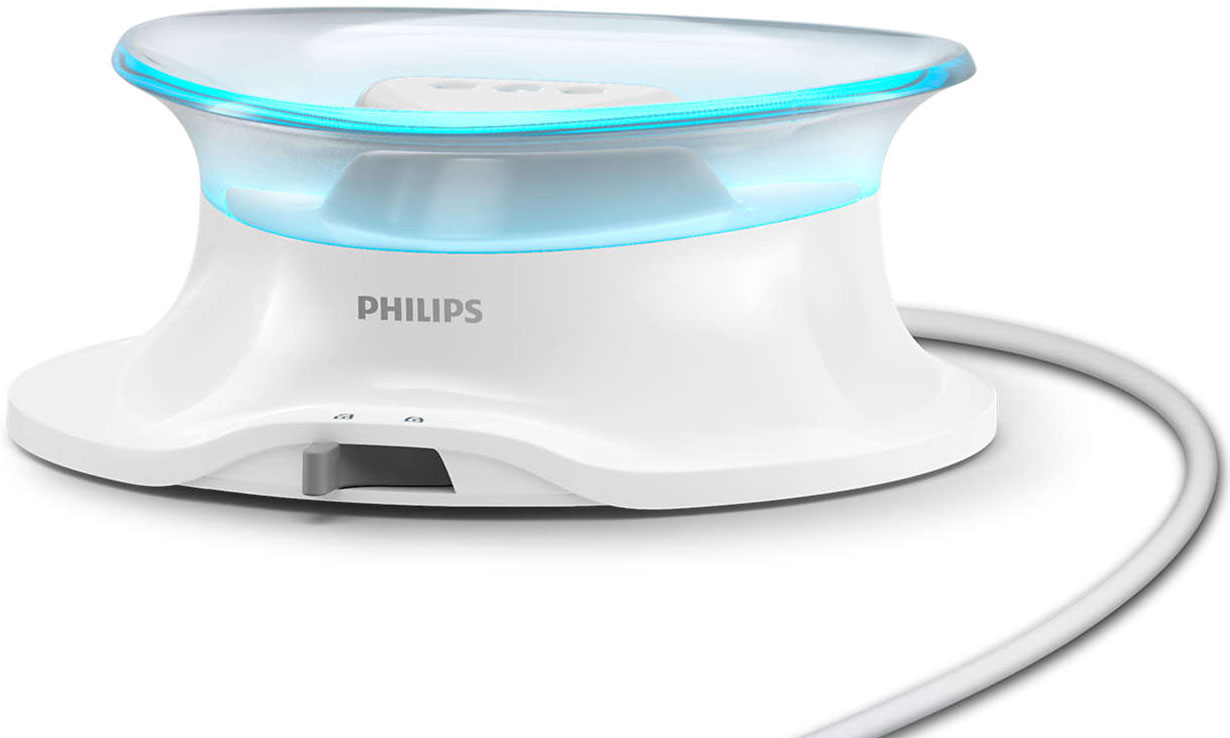 Most use special heating elements that rely on a rechargeable battery to retain the heat. These work in the same way as the batteries you’d find in telephones and power tools.

More:  Broadband customers could save millions as providers commit to price changes – Which? News

You charge up the battery, which is contained within the iron itself, by attaching it to a base unit.

Most irons take only a few seconds to charge for use, though if you have more than one or two items to iron, you’ll need to pop the iron back on the base unit to recharge every now and then. How often will depend on the iron itself, as well as the setting you’re using it on.

The base unit is powered through a cord plugged into a socket, so – even with a cordless iron – you won’t be completely wire free, as you’ll probably want to rest the base unit at the end of the ironing board for ease of access.

The other type of cordless iron retains heat and produces the necessary amount of steam with the help of boiling water, but we are yet to test any that work in this way.

There’s no evidence to prove that one type works better than the other, but the first type is far more widely available.

What’s the lifespan of a cordless iron?

Cordless products typically don’t last as long as their corded counterparts. Battery failure is one of the most common reasons cordless appliances stop working, and irons are unlikely to prove an exception.

As cordless irons are still a relatively new product, we haven’t been able to test how long this particular home essential will last in cordless form.

The batteries in irons may last a bit longer than this, especially if you don’t iron that frequently. However, they’re unlikely to last as long as you might usually expect of an iron; according to our 2019 reliability survey, the average owner kept their last iron for around six and a half years before it broke and needed to be replaced.

The battery on a cordless iron would be likely to give up well before any other kind of fault developed.

And your warranty is unlikely to help. Most manufacturers will only cover the battery of your cordless iron for a year – perhaps two if you’re lucky. This means if your battery fails outside of this period, you’ll have no option but to buy a new model. That’s bad news for the planet and your pocket.

If you’re looking for a lightweight iron but aren’t quite ready to part with your power cord, check out our easy-to-use steam irons.

Alliance Data to Host Virtual Investor Event on May 18, 2021

The problem with rapid Covid tests – Which? News