Some Ryanair passengers have found that fares when rebooking are more expensive than a new ticket on the same flight.

While Ryanair claims to have waived its usual fee for rebooking, passengers still have to pay the fare difference. And in some instances have found the change fare is higher than the fare advertised for a new ticket on the same flight.

The additional sum charged to Ryanair customers ranges from £10 to £80, in the examples supplied to Which? Travel.

From refunds and cancellations to FCO warnings. Read our full Coronavirus outbreak Q&A: advice for travellers

You can keep up to date on all the Which? coverage over on our coronavirus advice hub.

When one passenger tried to rebook their Dublin to Malaga flight for 19:50 on 3 August, he found the rebooking fare was priced at €136.99. But when he then checked the Ryanair website for the price of a new ticket on the same plane, it was just €48.99 – that’s €88 cheaper.

Like other airlines, Ryanair is not allowing customers to cancel flights and receive a refund, even when travel is against FCO advice. Instead passengers are advised to rebook for a later date.

Why are Ryanair rebooked fares higher? 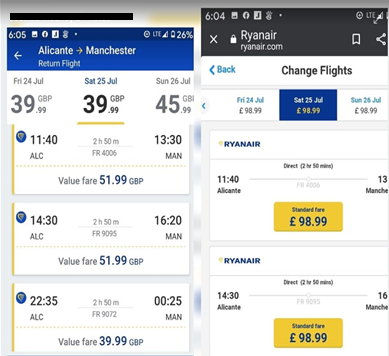 Airlines often claim that ‘dynamic pricing’ is the reason fares can differ, as they rise and fall with demand.

However, some passengers found different prices for fares checked at the same time. The image here shows a change fare priced at £98.99 for a rebooking from Alicante to Manchester. But a new flight was available for just £51.99

Several other passengers supplied evidence of being overcharged for rebooking.

Which? Travel approached Ryanair to comment on these findings but it hadn’t done so at the time of publication.

What should I do if I am rebooking a Ryanair flight?

Check both the price of the change fare and the cost of a new flight.

Ryanair still won’t refund the cost of the original flight if you cancel, regardless of FCO advice. However, if the airline cancels the flight, it has to give you a refund.

The best practical advice at the moment is to rebook that original flight for a date where you pay no fare difference in the hope that it subsequently gets cancelled.


See More News From: Which?
View all companies covered in the Company A-Z List

Are Argos’ cheap Hypa laptops any good? – Which? News