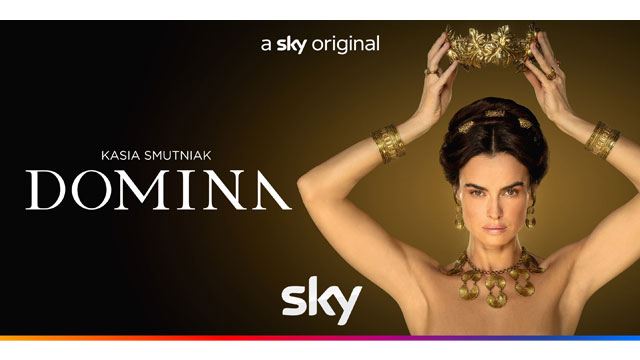 Sky today releases the official trailer and key art for brand new Sky original, Domina, and confirms the series will debut on 14 May on Sky Atlantic and streaming service NOW.

The trailer can be found here.
Download key art here.

The epic historical drama series brings to life the power struggles of Ancient Rome from a different perspective; that of the women. It follows the life and extraordinary rise of Livia Drusilla, who overcame adversity to become the most powerful woman in the world.

Sky is Europe’s leading media and entertainment company and is proud to be part of the Comcast group. Across six countries, we connect our 24 million customers to the best entertainment, sports, news and arts including our own award-winning original content.

Our technology, including the market leading Sky Q, connects people to everything they love – with entertainment from Sky TV, Netflix, Disney+, Amazon Prime Video and BBC iPlayer, and apps like Spotify, YouTube, BBC Sounds, Highbrow, Fiit, and more, in one place, easy. Our streaming service NOW, brings viewers all the enjoyment of Sky with the flexibility of a contract-free service.

Building on the success of Sky Originals like Chernobyl, Bulletproof and Brassic, we are doubling our investment in original content by 2024 through Sky Studios. Sky News provides impartial and trustworthy journalism for free, Sky Arts is the UK’s only dedicated free-to-air arts channel making the arts accessible for everyone and Sky Sports, our leading sports broadcasting service brings customers some of the biggest and best global sporting events from the Premier League to Formula 1 and everything in between. Our new TV and movie studio, Sky Studios Elstree, which will open in 2022, is expected to create over 2,000 new jobs and generate an additional £3 billion of production investment in the UK over the first five years.

More:  The Secret Garden in cinemas and on Sky Cinema from 23 October

NOW is the home of brilliant entertainment. We’re one of the UK’s leading streaming platforms with critically acclaimed shows, new and exclusive movies, unmissable sport and epic kids TV – all with no contract. Join in with an Entertainment, Cinema, Sports, Kids or hayu Membership to stream instantly across TV, mobile, desktop and over 60 other devices. Watch on the go and even offline with our app by downloading shows and movies.

Plus, members can enhance their experience with NOW Boost – that’s full 1080p HD, Dolby Digital 5.1 Surround Sound and streaming on up to 3 devices at once, for an extra £3 a month.

For super-fast broadband, members can enjoy a contract-free connection with a NOW Brilliant Broadband, Fab Fibre or Super Fibre Membership.

Go behind the scenes: Instagram.com/NOWTV

We develop, produce and fund original drama, comedy and documentary for Sky’s 24m customers and beyond, with 52 scripted shows already in production. Building on the success of critically-acclaimed Sky originals including Emmy-winning Chernobyl, Bafta-winning Patrick Melrose and international hits Babylon Berlin and Riviera, Sky Studios is the new creative home of Sky originals, such as The Third Day with Jude Law, ZeroZeroZero from the makers of Gomorrah and The New Pope directed by Academy Award-winning director Paolo Sorrentino.

More:  Sky One and NOW TV Commission Dating No Filter

We’re also developing a new TV and movie studio, Sky Studios Elstree, which is expected to lead to the creation of over 2,000 new jobs and generate an additional £3 billion of production investment in UK creative sector in the first five years alone.

Tiger Aspect Productions, part of Banijay UK, is internationally recognised as one of the UK’s most successful and prolific independent television producers. Producing high profile, multi-genre content for both UK and international audiences, key productions include Peaky Blinders (BBC One), The Good Karma Hospital (ITV ), Hitmen (Sky One), The Other One (BBC One), Man Like Mobeen (BBC Three), Jack Whitehall’s Travels With My Father (Netflix) and Mr Bean (CITV). Forthcoming shows include Domina for Sky Italia/Sky Studios, Intergalactic for Sky One and Viewpoint for ITV.

Fifty Fathoms is a boutique scripted label within Tiger Aspect. Recent productions include Adult Material (Channel 4) and The A Word (BBC One). The company’s credits also include Fortitude (Sky Atlantic), BAFTA winning BBC film Marvellous and Guerrilla for Sky Atlantic and Showtime.

BBC Radio 1’s Live Lounge Allstars single ‘Times Like These’ hits No.1 in the UK chart