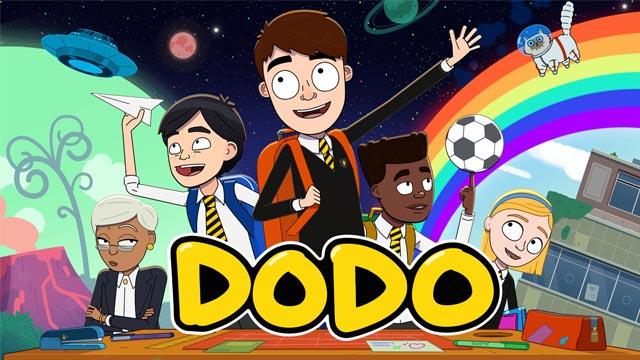 A new animated school-based original comedy series, Dodo, narrated by singer-songwriter Ricky Wilson and starring Dylan Llewellyn (Derry Girls) as the voice of the lead character, is set to air on Sky Kids next month (June 14).

The 20-episode British comedy animation, produced by BAFTA-winning Wildseed Studios, is a funny, relatable and heart-warming portrayal of everyday school life in the UK as experienced by 11 year-old Joe Connolly.

Narrated by Kaiser Chiefs frontman, The Voice UK judge and former art teacher Wilson, the series follows Joe as he navigates the dramas and pitfalls of his first year at secondary school. With new situations and embarrassments around every corner, small events mean big drama for Joe, as he tries to fit in, make new friends, girlfriends and even loses his school trousers. But Joe has best friends Frisbo, Pete and Lily at his side, helping him realise that each challenge is really not the end of the world as he triumphs over adversity and survives another school day.

The series is based on multi-award-winning film and YouTube hit Not The End of the World, by British creator and series director Jack Bennett, which he made while still in his final year at university where he was discovered by Wildseed. In keeping with their mission to unearth new talent, Dodo is Jack’s first series for television but, according to Wildseed’s creative director Jesse Cleverly, “I’m sure it will be the first of many.”

Estelle Hughes, Commissioning Editor for Sky Kids said: “Joe’s dramas at secondary school will feel familiar to anyone who has ever experienced the highs, lows and anxieties of the first year in ‘big school’. Yet, with his incredible animated fantasies and disaster scenarios, they’re also uniquely funny and surprising. We know our audience will love this show.”

Wildseed Managing Director Miles Bullough said: “Dodo presents a funny, humane and above all compassionate picture of what it is like to be 11 years old, discovering how bewildering the world can be. As a result, this warm-hearted and life-affirming show will resonate with anyone – whether still at school or looking back on their own school days – who has experienced the intensity of this stage of life.”

Dodo is produced by Helen Stern (Gumball) with the support of Ben Ward (Horrible Histories) on scripting and with executive guidance provided by Wildseed’s Head of Kids and Animation Sarah Mattingley.

Sky Kids offers families 8 kids’ channels and over 10,000 episodes of on-demand viewing as well as the Sky Kids app, a safe space for younger kids-focussed content, games and art tools with parental controls including a sleep mode so parents can moderate screen time. This is complemented by the pin protected Safe Mode on Sky Q, so there’s no danger of children straying into any areas of content that are not right for them.

Sky is Europe’s leading media and entertainment company and is proud to be part of the Comcast group. Across six countries, we connect our 23.4 million customers to the best entertainment, sports, news and arts including our own award-winning original content.

Our technology, including the market leading Sky Q, connects people to everything they love – with entertainment from Sky TV, Netflix, Disney+, Amazon Prime Video and BBC iPlayer, and apps like Spotify, YouTube, BBC Sounds, Highbrow, Peloton, Fiit, and more, in one place, easy. Our streaming service NOW brings viewers all the enjoyment of Sky with the flexibility of a contract-free service. Through our new B2B broadband provider, Sky Connect, we offer superfast broadband with business-grade 4G back-up to small businesses in the UK.

Building on the success of Sky Originals like Chernobyl, Gangs of London and Brassic, we are doubling our investment in original content by 2024 through Sky Studios. Sky News provides impartial and trustworthy journalism for free, Sky Arts is the UK’s only dedicated free-to-air arts channel making the arts accessible for everyone and Sky Sports, our leading sports broadcasting service, brings customers some of the biggest and best global sporting events from the Premier League to Formula 1 and everything in-between. Our new TV and movie studio, Sky Studios Elstree, which will open in 2022, is expected to create over 2,000 new jobs and generate an additional £3 billion of production investment in the UK over the first five years.

Founded in 2013 by Miles Bullough & Jesse Cleverly, Wildseed Studios is a multi-award-winning development and production studio for live action and animation – focused on working with new talent on scripted entertainment for kids, family and young adults. Wildseed Studio’s movies, series and shorts have been seen on Netflix, BBC3, Disney, SkyStore, Federator’s Cartoon Hangover and channels all around the world.

How do you do data? The nation’s new data tribes revealed

Stephen van Rooyen: The power of sport to bring us together through challenging times