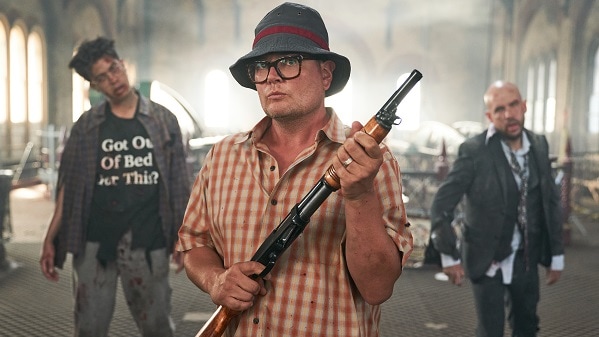 Filming on Sky’s smash hit entertainment series There’s Something About Movies and BAFTA-award winning A League of Their Own is set to start this month, with both shows landing on screen later this year.

There’s Something About Movies, produced by CPL Productions, a Red Arrow Studios company, and Motion Content Group, starts filming its third series with Alan Carr as host once again with Jennifer Saunders and Michael Sheen returning as team captains. They’ll be joined by Tom Allen, as well as stars of the big screen and guests from the world of entertainment for a feast of film trivia, movie insights and the infamous re-enactments.

Alan Carr said: “Not only am I really excited to be able to leave the house but also I am buzzing to get started on series 3 of There’s Something About Movies, boy have I missed mucking around with Tom Allen, Jennifer Saunders and Michael Sheen and although going to the cinema seems like a distant memory, we will be doing our best to recreate some of the movie magic that we’ve all been missing this summer. Bring it on!”

Fan-favourite end games, where the celebrity panels are challenged to re-create iconic scenes from the big screen, will make a welcome return. Episode six of the series will also be the show’s first ever Christmas Special and will air during the 2020 festive period.

The upcoming 15th series of A League of Their Own will be the first in a new three series extension deal between Sky and production company CPL Productions. The show has been a stalwart in Sky’s entertainment portfolio over the past decade and one of the most popular shows on the Sky One. Sky are delighted to confirm the commission and look forward to seeing the show on air for at least another three series.

Jamie Redknapp and Freddie Flintoff said: “We can’t tell you how good it feels to be getting back to the studio. We love this show and CPL and Sky have done everything possible to make this happen. There’ll be challenges we can’t wait to get stuck into and we’re sure we’ll be kept on our toes.”

Romesh Ranganathan said: “Despite the challenging circumstances, we are going to do our utmost to make League of their Own as good as it always is, and I can say that with confidence because other people have to sort all that out and it requires no extra work from me”.

Both shows will film without a live audience for the first time but will still include the fan-favourite end games, VTs which have started filming and challenges throughout the series.

Barbara Lee, Commissioning Editor at Sky says: ”We all need some joy in our lives so we are excited to start production on two of our customers’ most loved shows: A League of Their Own and There’s Something About Movies. We have worked extremely hard to ensure safety measures are in place to safeguard our guests and the people making the series. These are specifically tailored to the production needs and we are confident we will deliver two stellar shows for our viewers to enjoy.”

The safety and well-being of cast, production teams and all those involved with both series is the top priority, while production company CPL and Sky are working to keep the shows as close to the original formats as possible within current government guidelines.

Murray Boland, Creative Director at, CPL says: “It’s great to be getting back into the studio with two of our big entertainment shows. There are obviously huge challenges to filming in a safe way during the current pandemic. However, the teams on both A League of Their Own and There’s Something About Movies have been hugely inventive in coming up with solutions that keep everyone safe, while making sure that both shows are as action-packed and funny as always.”

There’s Something About Movies and A League of Their Own are commissioned by Zai Bennett, Managing Director of Content for Sky UK and Ireland and Phil Edgar-Jones, Director, Sky Arts and Head of Entertainment. The Commissioning Editor across both programmes for Sky is Barbara Lee. The Executive Producers for CPL Productions are David Taylor, Murray Boland and Danielle Lux, and the Executive Producer for Motion Content Group is Martin Oxley.

NOW TV is the home of the best new and original British comedies, Oscar, BAFTA, and Emmy award winning dramas, Sky originals and movies. NOW TV customers can enjoy over 30 new movies every month and Sky Atlantic shows, without a contract.

CPL Productions, a Red Arrow Studios company, is one of the most successful independent TV and radio production companies in the UK. An impressive roster of hit shows includes Sky One’s double BAFTA-winning series A League of Their Own, the US version Game On! for CBS, and spin-off series A League of Their Own: European Road Trip and US Road Trip; There’s Something About Movies for Sky One; Sky One comedy The Reluctant Landlord, written by and starring Romesh Ranganathan; multi-award winning Old People’s Home for 4 Year Olds, The Restaurant That Makes Mistakes and Married At First Sight – all for Channel 4; scripted series Brief Encounters for ITV; and Harry Hill / NIT Television’s Alien Fun Capsule for ITV, Harry Hill’s Clubnite and Reasons for be Cheerful with Matt Lucas for Channel 4, and new comedy sketch show Ellie & Natasia for BBC Three. The company also has a joint venture with Romesh Ranganathan called Ranga Bee Productions, producing Romesh Presents and Rob and Romesh Vs for Sky One.

Motion Content Group invests in premium content to create value and opportunities for partners and advertisers combining entertainment, media and advertising.  Motion uses its expertise, innovation and global infrastructure to fund, develop, produce & distribute both owned and third-party licensed content. Partnering with the world’s leading producers and distributors to deliver premium content to networks and platforms, supporting their editorial, creative and commercial requirements.  Headquartered in London and Los Angeles, Motion currently operates in over 30 countries worldwide and has a broad range of award-winning programming distributed globally.