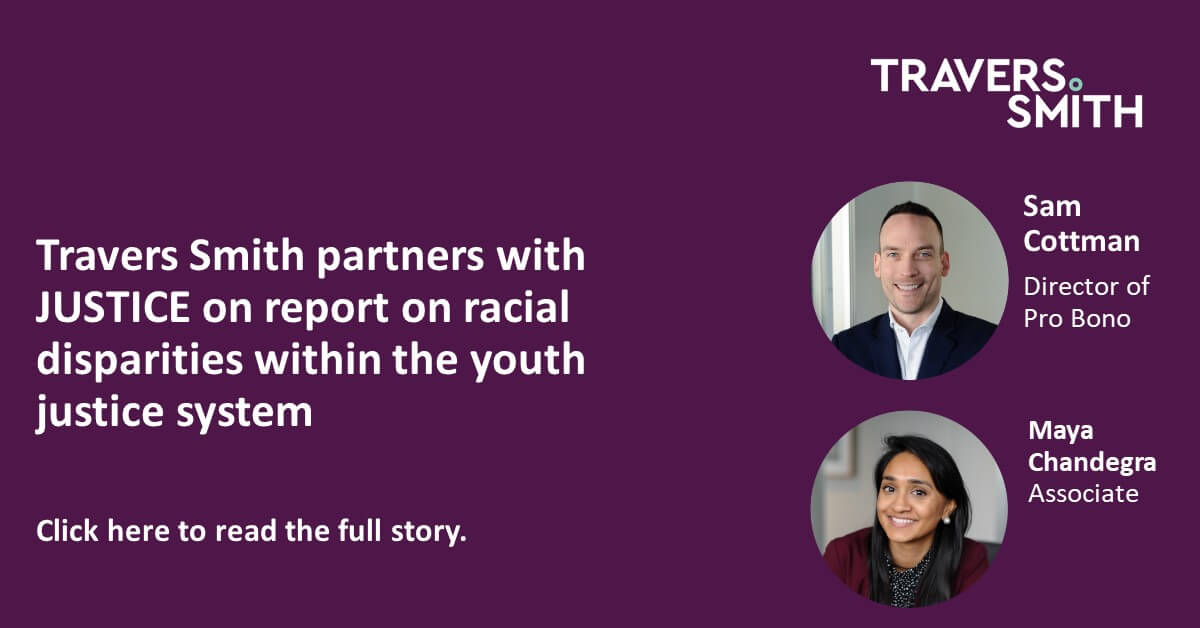 Travers Smith LLP is delighted to have been the corporate partner for the human rights charity JUSTICE on the production of Tackling Racial Injustice: Children and the Youth Justice System, a report on racial disparities of children in the youth justice system.

The report, which has been published today, seeks to examine the causes of Black, Asian and Minority Ethnic (BAME) disproportionality in the Youth Justice System (YJS) of England and Wales.

As part of the JUSTICE Working Party, the Travers Smith Team, led by Director of Pro Bono, Sam Cottman and Associate Maya Chandegra, has been closely involved in the research and production of this report.

Having convened in October 2019, the Working Party has made 45 recommendations, which seek to increase decision-makers’ understanding of the child appearing before them, with the aim to eradicate the bias, suspicion and misperception that pervade discriminatory exercise of power, and meet BAME communities’ expectations of fair and impartial treatment at each stage of the criminal justice system.

More:  Travers Smith advises on the sale of a UK solar business to Bluefield Solar

Changes proposed in the JUSTICE report will help to build a child-first approach into the justice system, with sources of bias and discrimination addressed through changes to policy, institutional culture, and practices. While no single report can undo years of structural racism, this report supports the continued efforts of communities seeking equal justice. In sum, it is the responsibility of the system, and not the children, to change.

Travers Smith’s Director of Pro Bono Sam Cottman commented: “Racial injustice is deeply ingrained in the UK. In the context of the criminal youth justice system, the problem is systemic and undeniable. Despite making up only 18% of the child population, BAME children make up 52% of those in custody. The impact of this disproportionality on their lives and futures is devastating.

Travers Smith has been the Corporate partner of the JUSTICE working party seeking to address this issue since Autumn 2019. Our team has committed over 600 hours of time attending working party and sub-committee meetings, conducting research and actively participating in the process. I have personally attended every single meeting during the 17-month project. To learn from the experts in this area and hear directly from those on the front line has been thought-provoking, educational and, above all, humbling.

We are proud to have been part of the JUSTICE working party that has produced this important report. We will continue to support JUSTICE as the work moves from investigation to implementation and our broader pro bono programme further expands its racial justice focus.“

JUSTICE’s Director, Andrea Coomber said: “While the youth justice system has made improvements in recent years, these are not shared equally. Our Working Party has found that BAME children are being left behind, languishing under years of systemic racism and poor treatment from various criminal justice agencies. Our recommendations seek to put things right; ensuring that BAME children are not treated as inherently suspicious or criminal, that their voices and experiences are made central and heard, and that those who make decisions that impact BAME children are fully held to account. A child-first approach is essential for the credibility of our justice system.”