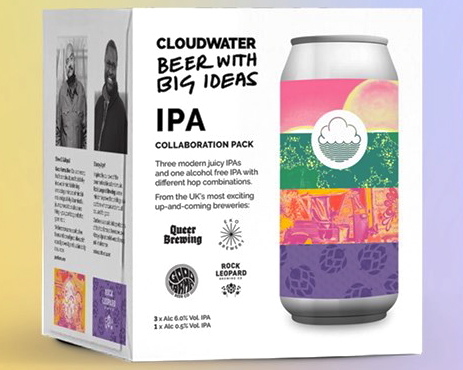 Soaring demand for low and no alcohol beer has prompted a historic first for the drinks industry – the launch of the first ever four-pack containing three regular and one alcohol free beer.

The 4-pack, launched by Manchester independent brewer, Cloudwater is go on sale exclusively at Tesco stores this week.

The move follows a huge increase in sales of low and no alcohol beers in the last two years at Tesco, with growth up by more than 40 per cent.

During the same time period demand for craft beer at Tesco has rocketed by 75 per cent with ranges being renewed twice a year to bring customers the most exciting new developments from craft brewers.

The juicy, thirst-quenching beers in the four-pack are collaborations between Cloudwater and four fledgling UK brewers whom they are working with in order to raise awareness of their work within their own local communities.

Rock Leopard and Eko Brewery are believed by Cloudwater ‘to be the only 100% black-owned breweries currently operating in the UK’.

Queer Brewing, meanwhile, was founded in early 2019 to provide visibility for LGBTQ+ people in and around the beer industry, helping to raise money for various LGBTQ+ related charities.

And Good Karma is a brand focused on alcohol-free beer that is also vegan, with social responsibility at its core.

The four beers in the pack are as follows:

A juicy IPA brewed with Simcoe, a long-established hop that has become a mainstay in modern craft beer, providing flavours of succulent pineapple, apricot and pine. A smooth body that’s high in oats and our aromatic house yeast accentuate the rich, juicy flavours.

One Way Or Another (Cloudwater x Rock Leopard Brewing)

An IPA brewed with one of the boldest and most distinctive modern hop varietals, Mosaic, which is known for flavours of overripe tropical fruit and blueberry, alongside earthy, resinous notes.

Cloudwater founder Paul Jones said, “These breweries that we have worked with represent communities that are currently underserved within the craft beer industry and we hope this platform will help to raise awareness of their work, grow appreciation for them and, ultimately, change the face of our industry.

“For the collaboration four-pack, we worked with all of these breweries to select a hop varietal they’re passionate about and brewed a single-hop IPA – in Good Karma’s case, an alcohol-free IPA – with each.”

Tesco craft beer buyer, Luke O’Connor said, “Both craft and low/no beers are massively popular at the moment so it makes sense to trial offering customers both in one four pack right now.

“We think the 4-pack will prove popular with households where one member is abstaining from alcohol or those who fancy a midweek beer but don’t want to drink alcohol.

“While demand for other beer types is also growing right now, nothing has come close to the interest we are currently seeing for craft beer.

“That’s down to the fantastic innovation coming from British craft brewers right now which has made this a very exciting time for beer enthusiasts.

“There are outstanding brews being created on a daily basis across the UK with a large variety of style profiles to suit every taste – from sours, sweet and even salty tasting stouts, smoothie style fruit beers, and crisp, hoppy IPAs.

“At the same time the quality of low and no beers has also improved greatly with craft brewers now getting involved and increasing the overall taste and choice available.”