As Jonah Hill debuts his first shoe with us, he does so like a true superstar, pledging to donate all of his royalties to Black Lives Matter.

He also made his shoe launch into a platform to announce how he will share his craft of storytelling, teaching a master class for our School for Experiential Education in Design (S.E.E.D.), which aims to prepare talented individuals for a career in the design industry, currently in its first year with a founding class of six groundbreaking women.

The shoe itself creates an organic link to Jonah’s own childhood influences, inspirations, and points of reference. Speaking on the design inspiration Jonah explains the creative process and his personal relationship to the silhouette: “I started thinking back to all the experiences I had growing up while wearing them, and tried to make my fantasy version of what I would have wanted when I first wore them.” 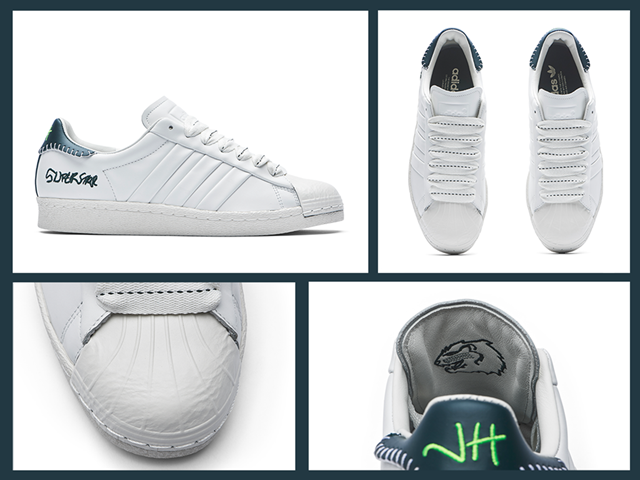 The silhouette features personal touches including “JH” and “Superstar” stitching in Jonah’s handwriting, and a lion embroidered on the back of the tongue, serving as an ode to one of his tattoos.

Inspired by Jonah’s upbringing on the West Coast during the 1990s, the collaborative Superstar sneaker honors the multidisciplinary creative’s love for the original silhouette while adding his own aesthetics to it. Blending sophisticated lines with homemade aesthetics, adidas Originals and Jonah Hill seek to evoke a premium feeling while highlighting a non-conformist edge.

The Superstar is available globally on July 11th at adidas.com/Jonah_hill.

KARLIE KLOSS DEDICATES HER FIRST COLLECTION TO NEXT GENERATION WOMEN