Sodexo’s Raj Verma, Global Senior Vice President, Human Resources Corporate Services has, for the third consecutive year, been listed in the EMpower 100 Ethnic Minority Executives List of senior people of colour who are leading by example and removing barriers on the pathway to success for ethnic minority employees.

The EMpower Ethnic Minority Role Model Lists supported by Yahoo Finance showcase business leaders who are breaking down barriers at work and working hard to smash the ceiling for ethnic minorities in the UK, Ireland, Europe, and people of colour in the United States and Canada.

In addition to the Empower top 100 executive role models list there is also a top 100 future leaders and to 20 advocates list published at the same time.

With equality issues right up there in the global agenda through the Black Lives Matter movement, it is more important than ever that we shine a spotlight on ethnic minority leaders, both present and future.  It is a great privilege to be included in the list once again. As a diverse group of leaders, from across all areas of business, we share a common goal to act as role models and inspire young talent from under-represented BAME communities. We have a key role to play to show that while barriers do still exist, they are being broken down and can be overcome. 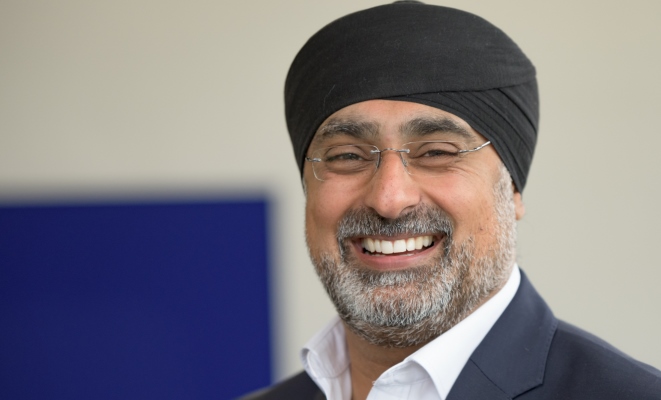 In addition to his role as senior vice president, human resources, for the Sodexo’s global corporate services business, Raj is the global executive sponsor for Sodexo’s ethnicity workstream within the organisation’s global culture and origins advisory board.

More:  Sodexo Named by Working Mother as One of the Best Companies for Multicultural Women

Through his role on the advisory board, Raj encouraged Sodexo’s regional leadership committee for the Sodexo UK & Ireland to sign up to the EMpower Ethnic Pay mandate.  Raj also sits on the steering committee of the Warwick University Business School Mentoring programme and is on the Board of Trustees at Barnado’s.

A British-born Sikh, Raj was Sodexo’s first ethnic minority global senior vice president in human resources and continues to be very visible across the organisation. He regularly presents at conferences and panels both internally and externally and recently shared his thoughts on ethnicity in the workplace. Raj seeks to provide visibility at grassroots level, so that ethnic minority leaders are not seen as unusual.

Those on the EMpower Senior Executive List are leading by example and blazing a trail for others to follow. They have not only achieved success in their own careers but have made it their mission to make change real happen within their own organisations and across wider society

Sodexo has 470,000 employees of 134 nationalities across 67 countries. Its 100 million daily consumers demand a global cultural mindset and business approach. The company has a commitment to each of its countries being engaged in partnerships to empower minority communities (as applicable for each country) by 2025. The organisation’s global culture and origins taskforce (OneSodexo) has three areas of focus – ethnicity, refugees and first nations (indigenous population)

More:  Sodexo teams up with WWF to encourage students to increase uptake of plant-based diets

All of the ethnic minority leaders were nominated by peers and colleagues. Nominations were then reviewed by EMpower’s judging panel, including the head of Yahoo Finance UK, Lianna Brinded.

Each person was scored on the influence of their role, their impact on ethnic minority inclusion inside and outside the workplace, and their business achievements.

EMpower is one of three initiatives from INvolve, a membership organisation which champions diversity and inclusion in business. The other two are OUTstanding and HERoes.

Sodexo’s Tom Martin recognised by The Class of 2020