In its first ever virtual Spirit of Sodexo Awards ceremony, Sodexo UK & Ireland presented 23 awards to colleagues from across its business, with general services manager, Julie Evans, crowned Employee of the Year for her unwavering professionalism and dedication to delivering excellence.

Julie works at the Grosvenor Nuffield Health Hospital in Chester and has been with Sodexo for almost 30 years.  At the end of January 2020, she was asked to redeploy to Arrowe Park Hospital, the Wirral, to take on the role of operations manager at the quarantine facility being mobilised within the hospital’s staff accommodation block.

Julie did not hesitate in taking on the role and provided valuable support and leadership in the 48-hour mobilisation of the facility which was to house the first British coronavirus evacuees who had returned from Wuhan, China. Julie worked closely with Sodexo’s concierge team, Circles, and colleagues from across Sodexo’s business as they put in place bespoke catering, concierge and security services for people who were required to quarantine.

Initially set up for two weeks the Arrowe Park quarantine facility remained open for six weeks in total, during which time Julie was extremely professional and committed to ensuring the health, safety and wellbeing of everyone under Sodexo’s care at the facility, including those working there.

Throughout the pandemic, outside of work, Julie continued to demonstrate the spirit that makes her such a worthy winner today – volunteering her time to help those in need in her local community including shopping for elderly neighbours.  She is also a valuable member of Sodexo’s PRIDE employee network, managing its Twitter feed and membership of the network.

More:  Update on Animal Welfare In Our Responsible Sourcing Strategy 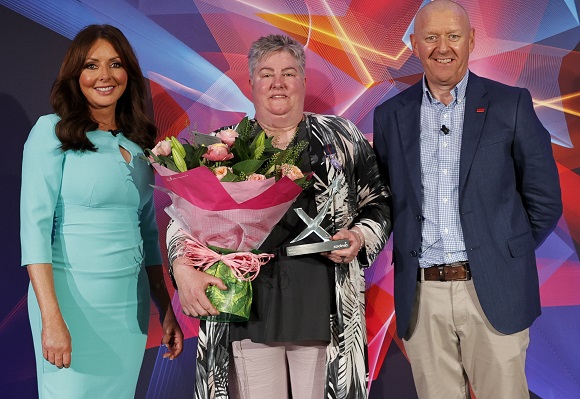 My sincere thanks and congratulations go to Julie and all our winners who have truly demonstrated the values which are at the core of our business and what these awards are all about – team spirit, service spirit and spirit of progress.

We often face significant challenges at very short notice and the pandemic has shown that our collective response is always extraordinary and evidences what great colleagues we have.

I am proud of the teamwork and individual commitment shown by our colleagues across the business as we have navigated these uncertain times.

Our teams have been front and centre in the fight against the Covid-19 pandemic since the very beginning, and it’s not just those providing critical support to essential services, many of our colleagues continued work tirelessly to keep our business running while working from home

I am humbled by the stories of loyalty and commitment right across our business, our Spirit of Sodexo awards this year have been uplifting and an absolutely incredible showcase of the hard work and phenomenal achievements of our colleagues.

For the first time there were three Region Chair awards, for Manager, Frontline and Team.

Anthony Boyton was recognised in the Manager category having transferred his skills from hospitality to FM. Anthony is employed by Sodexo’s sports and leisure business but due to the pandemic forcing the closure of hospitality he redeployed to support the national effort, and has been instrumental in the set up and management of Sodexo’s Covid-19 testing business.  Earlier this year Anthony also received industry recognition winning Account Director of the Year at the 2020 PFM Partnership awards.

Lorraine Durban, catering manager for Oasis Academy in Mayfield received the Frontline award. Lorraine readily redeployed to provide valuable support to Sodexo test centre teams in the south, quickly learning new skills and even after schools reopened Lorraine continues to support the test centres in her own time.

Also recognised for the Frontline award was Willaims Anyanwu from Sodexo’s City University, who was recognised for helping a gentleman who had collapsed on the street, calling an ambulance and staying until it arrived. Unbeknown to Willaims at the time, the man he helped was a fellow Sodexo colleague.

Finally, the Comfort Keepers team at the Religious Order Residential Unit in Ireland received the Team Award for their amazing response to the Covid-19 pandemic, overhauling their approach to care to ensure the health safety and wellbeing of everyone at the retirement home.

The Spirit of Sodexo Awards saw over 1,000 nominations for the 23 different categories. Sean Haley and HR director Sarah Perry hosted the ceremony from the Emerald Headingley Stadium in Leeds and were joined by TV presenter Carol Vorderman. Employee of the year winner, Julie Evans was invited as a finalist to join Sean, Sarah and Carol and was unaware she had won until her name was announced as the winner.

Other members of Sodexo’s regional leadership committee and Sodexo ambassador and former England Rugby star, Matt Dawson, also joined in hosting the ceremony from various locations across the UK and Ireland.