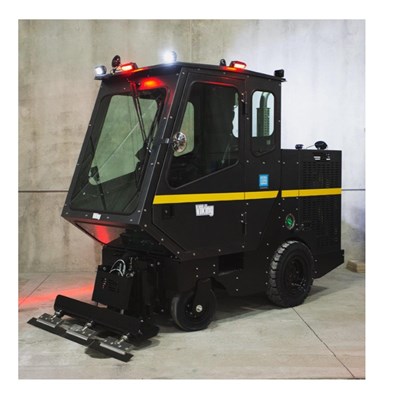 Following a successful bid for backing from Highways England’s Designated Fund, Kier Highways introduces its newest innovation, the ‘Deck Scraper’. A machine purpose-designed and built to offer a safer, more sustainable and efficient process throughout the removal of waterproof membranes.

Waterproof membranes are routinely used on structures such as bridges and underpasses to help protect against corrosive damage caused by winter gritting operations. They have to be removed to undertake concrete repairs, re-waterproofing and resurfacing which is traditionally done with an excavator that digs into the road’s surface.

The Deck Scraper vehicle acts as a much better alternative, using unique blade-technology to quietly shave off the membrane without damaging the road surface underneath .This new method will significantly reduce vibration, dust and noise pollution, greatly benefiting the environment as well as the people living nearby these roadworks.

The machine is also noticeably smaller than excavators and diggers and does not need an arm or a bucket, giving the operator near-perfect, 360-degree visibility.

The Deck Scraper was developed with partners CLM construction and US-based National Flooring Equipment with the first prototype unveiled to industry representatives earlier this month.

“By working with our design partners CLM and specialist manufacturer National Flooring Equipment, the project has culminated in the production of a method far removed from the existing techniques which are quite brutal and can often introduce additional damage to bridge decks as well as being extremely noisy and dusty.

“And with the creation of the Deck Scraper, we have been able to do that without compromising quality, output or negatively impacting on road users.”

Lisa Maric, innovations lead for the Midlands at Highways England comments: “Current methods to remove the waterproof layer are quite antiquated with environmental issues and some risk to the workforce. We wanted to develop a unique machine that would be more efficient and improve the safety of road workers while easing the impact on the environment and communities.

“Instead of essentially using a steel bucket with teeth to remove the membrane, we can use a blade to simply peel it off – quietly, effectively and without damaging the road which will also save time and money.

“It is anticipated that thanks to the Deck Scraper, this method will now set the benchmark expected for membrane removal throughout the country.”

Following two years of development and having undergone testing in the US, final trials were carried out at the Kier depot in Telford and the machine can now be taken to the market by National Flooring Equipment.