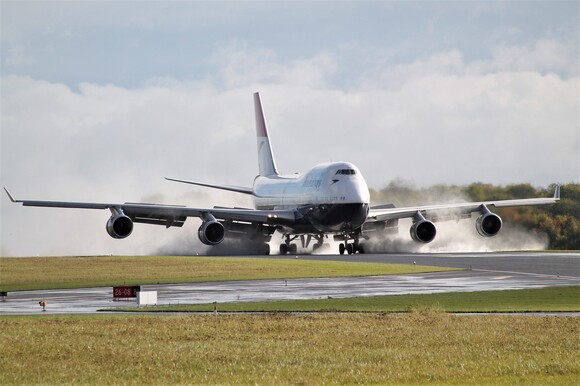 Monday 26 October, 2020 – Cotswold Airport will be the permanent home to an iconic British Airways 747 aircraft for locals and visitors to enjoy.

The Boeing 747, registration G-CIVB, will be permanently retired at Cotswold Airport, near Kemble in Gloucestershire. The aircraft is painted in the unique Negus livery which adorned British Airways planes in the 1970s and 1980s. The aircraft was one of four painted in heritage liveries to mark the airline’s centenary last year. It was also one of the final two British Airways 747s to leave Heathrow last month.

The airport will maintain the aircraft and plans to convert an area of its interior to be used as a unique business, conferencing and private hire venue, as well as a cinema for locals and an educational facility for school trips. It is planned that the aircraft will be open to the public from Spring 2021.

Suzannah Harvey, CEO of Cotswold Airport, said: “It is great news for locals and visitors who will be able to see and experience one of the most iconic passenger aircraft of its time. We’re absolutely delighted to make this happen following its final flight from London Heathrow to Cotswold Airport on 8 October.”

Sean Doyle, CEO of British Airways, said: “It was with great sadness that we retired our two final 747s based at Heathrow earlier this month, so we’re glad Cotswold Airport is able to give one of these aircraft a new home and a new lease of life. The 747, and the Negus livery, are iconic in British Airways’ past, and we hope locals and visitors will enjoy seeing this slice of history for years to come.”

A large percentage of all money raised from events on the aircraft will be used to support Cotswold Airport’s scholarship programme and charities. Every year the scholarship helps 10 students who have an interest in aviation related sectors or careers to undertake instructional flight time or experience various aviation career environments. This programme gives the students a fabulous insight, and many have gone on to careers in the Navy and RAF.

Cotswold Airport has supported the Air Ambulance, Help for Heroes and the RAF Benevolent Fund over the years. Usually they do a great Vintage Fly-in Weekend and a Best of British or Revival Festival, which has been attended by 10,000s over the weekends.

An airport steeped in history, Cotswold Airport (Kemble) is now home to a thriving general aviation community and a host of successful businesses. Kemble Air Services Ltd, the owners of Cotswold Airport, are totally committed to making it one of the finest airports in the country without spoiling the natural charm that abounds on this 532-acre site.

RAF Kemble was the former base of the RAF Red Arrows aerobatic team until they departed in ’83. Now known as Cotswold Airport after rebranding in ’09 and achieving airport status from the Secretary of State, it is a thriving aviation and business centre with many businesses developing ground-breaking engineering R&D.

More:  DOORS TO MANUAL AND CROSS CHECK FOR THE LAST TIME, AS BRITISH AIRWAYS SAYS FAREWELL TO ITS FINAL 747s

After the departure of the United States Air Force in 1993 Kemble faced a bleak future, and looked destined to go the way of so many ex-military airfields – back to agriculture or an industrial estate. However, over the years local businesses have occupied all pre-existing hangar infrastructure as well as many new, purpose built hangars. Aviation is booming at this historic airport. This was largely due to the successful acquisition of the airfield from the Ministry of Defence by Ronan Harvey and a consortium of local businesses in March 2001.

The Buccaneer and Phantom preservation groups will be a new welcome addition in 2020, and a further significant educational and visitor attraction.

2020 should see the fruition of the new RNP (GNSS) approach being implemented, a further significant infrastructure development and service offering from Europe’s largest privately owned airport.