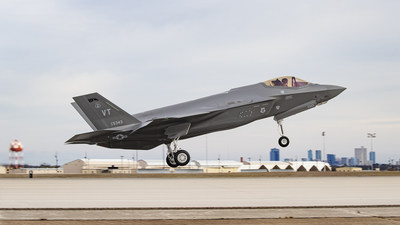 The 500th production aircraft is a U.S. Air Force F-35A, to be delivered to the Burlington Air National Guard Base in Vermont. The 500 hundred F-35s include 354 F-35A conventional takeoff and landing (CTOL) variants, 108 F-35B short takeoff/vertical landing (STOVL) variants and 38 F-35C carrier (CV) variants for the U.S. and international customers. The 250,000 flight hours include all F-35s in the fleet comprised of developmental test jets, training, operational, U.S. and international aircraft.

“These milestones are a testament to the talent and dedication of the joint government, military and industry teams,” said Greg Ulmer, Lockheed Martin, vice president and general manager of the F-35 program. “The F-35 is delivering an unprecedented 5th Generation combat capability to the warfighter at the cost of a 4th Generation legacy aircraft.”

The F-35 operates from 23 bases worldwide. More than 985 pilots and over 8,890 maintainers are trained.  Nine nations use the F-35 from their home soil, eight services have declared Initial Operating Capability and four services have employed F-35s in combat operations.

Headquartered in Bethesda, Maryland, Lockheed Martin is a global security and aerospace company that employs approximately 110,000 people worldwide and is principally engaged in the research, design, development, manufacture, integration and sustainment of advanced technology systems, products and services